Share All sharing options for: A Feline Football Fracas

Villanova will be eager to put their week one disappointment behind them when the same young team takes the field in Maryland on Saturday. The Towson Tigers have been a league doormat since joining the league, with no playoff appearances, no league titles and just one winning season since they left the Patriot League to join the CAA in 2004. Last season the Tigers had just one victory, against Coastal Carolina, and lost to Villanova in a blow-out. 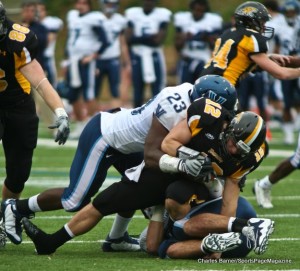 Villanova leads the all-time series 5-2, and has won the last four meetings.

Towson has improved from where they were in 2010, they opened the season with a 42-3 win against Morgan State Bears, a MEAC school that went 4-7 last season with no wins out of conference. The Tigers dominated that game on both sides of the ball, and were lead by Grant Enders, a sophomore transfer from Lackawanna Junior College, who was named the CAA Offensive Player of the Week for his trouble. Enders completed 15 of 19 passes for 197 yards, three touchdowns and an interception, while gaining another 47 yards on six carries and scoring a fourth touchdown with his legs.

Towson has 16 starters returning from 2010, giving them an advantage over the Wildcats in experience. Villanova appears to have taken a step back on the field in the wake of the graduation of one of the most dominating classes in the program's history. Replacing that class is a group of talented freshmen and inexperienced players who will need to get used to the speed and challenge of the college game quickly.

"We have to eliminate turnovers immediately (four against Temple)." Coach Andy Talley told KYW Newsradio. "And I’m just not sure what we can do offensively and defensively yet because we are so young. We’re still trying to figure it out. So we need a performance by our players on Saturday. Our kids need to really step up in a very tough atmosphere."

The offensive line struggled against Temple, which denied the 'Cats an opportunity to develop an offensive rhythm last Thursday. Dustin Thomas made a few poor decisions and was forced to make plays with his legs while be constantly under pressure from the Temple defense.

Towson is preparing to face that offense, which they expect to look a lot better on Saturday. Villanova has a spread-option attack that uses some wildcat and trick plays to catch defenses off-guard. Last week, Towson's 4-3 defense, lead by strong safety Jordan Dangerfield and defensive linemen, Frank Beltre and Marcus Valentine, was able to hold Morgan State to just 160 yards.

On the other side of the ball, the Villanova defense got carved up in the secondary, which will have to improve. Bernard Pierce powered through a seemingly infinite number of arm tackles by the linebacking corps before torching the secondary, which was also caught unprepared on a number of big passing plays that ultimately lead to scores. Nova's defensive line will need to get more pressure on Enders than they did against Temple to help the DBs and linebackers do their jobs.

Those DBs will need plenty of help with a Towson passing game that spread the ball around pretty effectively. No one reciever lit up the field against Morgan State, but there were seven players who caught at least two passes and two who caught at least three. Derrick Joseph lead the team in receiving yards with 63 and Tom Ryan lead in receptions, with three (and 55 yards). Towson had almost as many rushing yards at 264 as they did passing, at 270. Tremayne Dameron, a junior running back lead the team on the ground with 71 yards and was joined by fellow junior Dominique Booker with 60 yards and sophomore Sterlin Phifer who ran for 59 yards and a touchdown.

Towson appears poised to be a balanced offense that will test Villanova's ability to get stops.

Defense was supposed to be Villanova's strength this season, and perhaps against FCS programs that can still be the case. Temple's offensive line was loaded with massive bodies that were not going to be pushed around easily.

Towson does return five starters on offensive line from last season. Though not nearly as big as the linemen from Temple, the Tiger's blockers are still big kids, with the smallest being Center Doug Shaw at 260-pounds. The other four are all between 280 and 300 pounds. Antoine Lewis, Rakim Cox and Marlon Johnson could be in for another handful in week two, it seems.

There aren't a lot of easy games on the schedule this season, and the CAA doesn't have any real opportunities for an easy victory. Towson has not been good very often in the last few years, but they appear to be working toward something while Villanova is in the middle of rebuilding. This is a must-win game for the 'Cats if they intend to make any noise in the CAA and FCS ranks this season.

One disadvantage the 'Cats won't have this week is in the video room. In preparing for Temple, the Villanova staff and players were only able to review footage of Steve Addazio's system executed in Florida, but they weren't running entirely the same system on Thursday night, and the surprise factor only made things worse for Villanova. They had plenty of film of Rob Ambrose's Towson team, however, and if there were any doubts of what to expect, they had last weekend's game to double-check.

It shouldn't be a blow-out win like it was last year, but it should be a game where the Wilcats can grind out a victory ahead of the home opener next week. The inexperienced Villanova team got a wake-up call against Temple and will be better-prepared in week-two. The shaky looking team that lost to Temple may not turn into a dominating FCS powerhouse overnight, but if they continue to get better as the season goes along, anything could happen.

Towson and Villanova will kick-off at 7 p.m. Saturday at Johnny Unitas Stadium in Towson, Maryland. There will be no television coverage, but the game can be heard on the radio at 950AM in Philadelphia or via Villanova.com.