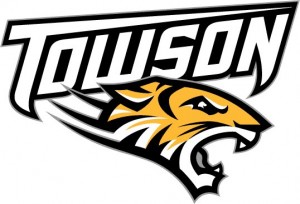 The script was very similar to week one: A strong first-possession drive took Villanova deep into enemy territory, before an untimely turnover ended the drive and the Wildcats' offense never recovered. The defense continued to give up big plays and let Towson cruise on their way to a 31-10 victory.

To make matters worse, starting quarterback Dustin Thomas came out of the game in the third quarter after running the ball down to the Towson 6-yard line and getting hit hard, suffering a separated left shoulder. Christian Culicerto, the senior walk-on who also pitches for the baseball team, took over and went 10 for 19, for 95 yards and a touchdown on that first goal line series. 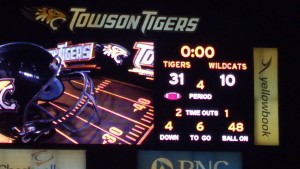 Thomas is likely to miss "several weeks," according to Talley, and it is not clear whether Culicerto or one of the two true freshman quarterbacks will get the start next week against Monmouth.

The Cats generated 360 yards of total offense, 179 passing and 181 on the ground, while Towson compiled 416 yards of offense.

JuCo transfer quarterback Grant Enders lead the Tigers' attack, throwing for 193 yards, completing 73% of his passes and averaging 7.4 yards per pass. Enders had one touchdown and one interception. He also lead Towson on the ground with 62 yards on 7 carries for an average of 8.9 yards per carry.

Villanova relied a little more on the pass than on the running game, with 32 passing attempts to 29 rushing attempts. That was despite the 'Cats running game being a success. Senior Lawrence Doss lead the way with 71 yards on 9 carries for a 7.9 yard average. Austin Medley, a redshirt sophomore, added 57 yards on 3 carries.

The 'Cats had an opportunity to score in the first half when Nick Yako was set up for a field-goal attempt from the Towson 10 — a 28 yard attempt. Yako's kick sailed wide right on what was perhaps his last three-point attempt for the season.

On the next field goal, with 14:29 left in the 4th quarter, the coaching staff made the call to change kickers and sent Mark Hamilton out, and he nailed the 31-yarder. After a strong performance in that role at the end of last season, it appears that Hamilton may have to take on both kicking and punting duties for the remainder of the season. He also had three punts for an average of 48 yards with a long punt of 51 yards. 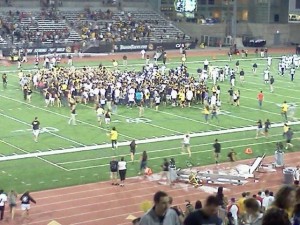 Towson students celebrated by rushing the field. Photo by @DomoDuh

"We are not good enough to win football games," Andy Talley said after the game. "We have to stop turning over the ball."

Sophomore receiver Joe Price was also injured in the game, the severity of which is currently unknown. He was taken to the hospital for testing and could be held out for a couple of weeks while he recovers.

The Tigers now have sole possession of first place in the CAA, possibly for the first time in CAA history.