Did Villanova really lose to a team that had just one win last season? They did, and it was a massive reminder of just how far this team is from the 2009 National Title winners. Still, that was not the same one-win Towson team that got crushed by one of the most talent-laden Villanova football teams ever to see the field. Towson improved.

Like many schools at the FCS level, Towson brought in a number of transfer players to stock their roster. 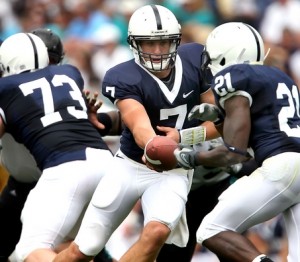 Pat Devlin wore a Penn State uniform before transferring to Delaware for his junior and senior seasons.

Don't call it unfair though, a laundry list of FCS schools use exactly the same technique. With 22 fewer scholarships than their FBS counterparts, it is hard to maintain a stable of developing players with some experience who can step into starting roles when a team loses players to graduation, transfer or early departure. Taking on transfer players helps fill those voids.

In the Bowl Subdivision (FBS), the transfer is less useful because players have to sit out for a year before they can play at a new school, but in the Championship Subdivision, transfers from FBS schools can play immediately.

Not only do they play immediately, but most of the time they either start or play a significant number of snaps. They are far more game-ready than the true freshmen recruited by most schools. A 250-pound FCS true-freshman offensive lineman will always struggle to deal with bigger and more experienced defensive players until they get used to the speed of the game and bulk up. A 300-pound transfer from an FBS program will slot in immediately as a starter for most teams and perform well.

That isn't to say that FCS recruits can't start right away and be good. Some, like Ben Ijalana are big enough, strong enough, athletic enough and just plain ready to play as freshmen at that level. Not all are.

FCS programs can try to plan ahead and line up recruits in advance to develop. Villanova, certainly tries. If Travis Poston hadn't transferred, he might have been starting on the Wildcats' offensive line this season — he backed up Ben Ijalana in 2009. If Chris Johnson hadn't left school around the same time, he would have started at quarterback this season.

When Johnson left the heir apparent became redshirt freshman Dustin Thomas and because of Poston's transfer, the 'Cats were forced to bring in a transfer from Division II Nebraska-Omaha and to convert a defensive tackle to sure up the offensive line.

Transfers are the backbone of programs like Montana, Delaware, UMass and Appalachian State, that are consistently on top of the FCS rankings. Look at the rosters of those programs and you will find a number of players from FBS programs and junior colleges. Villanova's roster has comparatively few. Every school has down years, but few fall off like Villanova has thus far this season.

Most top FCS programs recruit top FCS-level prospects and fill their most pressing needs with transfers from bigger schools. Villanova football has never been allowed to do that, and as a result they will have years with notable growing pains like this one.

Bowl Subdivision schools don't have that problem. Transfers rarely have an immediate impact at that level, and strong programs recruit players who succeed in their system and execute on that. With 85 scholarships, it is easier for those programs to withstand injuries, graduation and player attrition.

Stanford, a school that went to the Orange Bowl (BCS) last season and is ranked 6th in the country this season, has exactly two transfer players on it's roster. One is a longsnapper who transferred in from a Divsion III liberal arts college and the other is a reserve kicker from Notre Dame. They have no JuCo players. They win with whoever they recruit.

It is tough to balance the demands of winning football and strong academics at an FCS school. It may be somewhat easier to do with a BCS football program, but Villanova's chances of fielding one of those are still in question, and while this season's results are irrelevant to where the program will be in 2015, a one- or two-win season is hardly the makings of a public relations coup for the Big East.