Share All sharing options for: Injury Report: QB Thomas out for season? 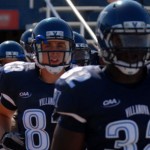 On Saturday night, Dustin Thomas took a hard hit after taking the ball down to the opposing 6 yard line on the 'Cats first scoring play. He came out of the game and did not return. At the time, the word was that the red shirt freshman quarterback suffered a separated shoulder -- an injury that would keep him out of commission for at least 6-8 weeks. Coach Talley told reporters on the CAA Football conference call this morning, however, that Thomas's injury might have ended his season.

"I think he’s done for the season," Talley said on the call.

Chris Polony, a true freshman, was listed as #2 on the depth chart, but when the injury occurred, the senior walk-on, Christian Culicerto, who served as the back-up last season was called into duty. Culicerto was reasonably effective, throwing a touchdown to cap off the scoring drive and completed 10 passes for 95 yards.The coaching staff will now pull the proverbial redshirt off of Polony, who will start Saturday's home opener against Monmouth University.
"We prepared Chris as the backup, but decided to go with Christian to maintain his redshirt [on Saturday]," Talley said. "With Christian being a senior and Chris a true freshman, it makes sense to get the young guy ready for the future. Christian did a great job, but we need to groom the young guy."

They might also use true-freshman John Robertson, who has appeared for one play in the Temple game, to run plays from the wildcat package.

Perhaps even worse is the injury to Joe Price. Wide receivers were expected to be a strength for the 'Cats this season, as a position where size, skill and depth would be plentiful, however, the injuries to sophomore Joe Price and senior Norman White are taking their toll.

Price was taken to the hospital after his injury on Saturday where he was diagnosed with a concussion, four broken ribs, a collapsed lung and a sprained left ankle. He was held there late while doctors ran tests. He is currently still in the hospital in Maryland, where doctors inserted a tube in his chest to relieve pressure on his collapsed lung. He will hopefully get to return to Philadelphia tomorrow.

According to the head coach, "The problem for us is that we lost three playmakers and in this league you need playmakers to be successful."

The Wildcats' passing attack has been less than stellar in the first two games. Call it a lack of playmakers or an abundance of youth. The running game has been statistically stronger so far, but it is tough to call hand-offs when a team is often playing from behind on the scoreboard.

"It’s not like when Chris Whitney took over, all he had to do was manage the game because he had so much talent around him. We needed Dustin Thomas to make plays for us. Right now, our quarterback has to manage the game and make plays."

Talley noted that while the team continued to struggle with turnovers, they would not be competitive in the CAA conference. They have turned the ball over seven times in the first two games, and opponents have converted six of those opportunities into scores.

It has been a while since the Villanova football program hasn't appeared somewhere in the FCS polls. The 0-2 Wildcats, however, just haven't looked like one of the nation's top FCS programs in the first two weeks. They dropped from 20th last week to unranked. They did receive a few votes, however, for a total of 128 points, which was still (inexplicably) greater than the 116 points earned by the Towson Tigers who are now 2-0 and unranked.

Penn, who opened the season ranked and dropped out after not playing in week one or two (an Ivy League tradition), earned 199 points in the poll. The 'Cats will face them at Franklin Field in week 4.