Jay Wright and the Point Guard

Share All sharing options for: Jay Wright and the Point Guard

Maalik Wayns will be the face of Villanova basketball in the 2011-12 season, there are no doubts about that fact. Jay Wright loves his point guard and is poised to hand the reigns and the starring role in his offense to Wayns. Sure, he played plenty last season and started most games, but the Philadelphia-bred guard takes on a lead role this season. 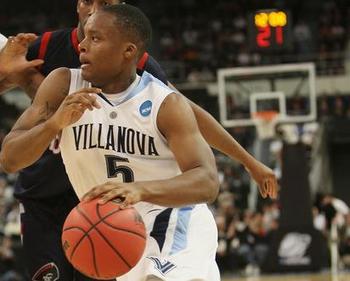 Like Corey Fisher and Scottie Reynolds before him, Wayns will be asked by Wright to put points on the board.

A lot of coaches are happy with a point guard that protects the ball and sets up his teammates to score more than shooting himself. Jay Wright, however, has always called for his 1 to shoot the ball at a relatively high volume and score. He doesn't do that because he is adjusting his "system" to the talent, but rather because his system demands it.

The proof is in how he handled the 2007 Pan American Games roster. Kansas' Mario Chalmers was among the players called in to try out for the team, and he told his story in the book "Beyond the Phog." On the try-out he said:

Jay Wright cut both Sherron and me from that team and kept his own player from Villanova, Scottie Reynolds, who had clearly been the worst player at the entire camp. He led the whole camp in turnovers. Sherron didn’t play all that well, either, because his knee hadn’t recovered from the previous season. But for me, I felt like I did everything right. I led them in steals, I had a lot of assists and I barely had any turnovers. But I wasn’t shooting the ball very much. They used one of those international balls, so they were different. I didn’t like the ball. I shot maybe six times.

Perhaps Chalmers' analysis of Reynolds' game was perhaps a bit biased, but Reynolds did get relieved of his starting role by Wright after the team opened the tournament 0-2. Importantly, however, is that during the try-out, Reynolds shot the ball regularly while Chalmers concentrated more on setting his teammates up. That was the reason Chalmers didn't make the cut:

When they cut me, they told me it was because I didn’t score and that they wanted a scoring point guard. I was like, "Why do y’all need all these scorers? What do you need a scoring point guard for when you’ve got all these other scorers?" They had Alonzo Gee from Alabama and guys that could already score. I was just trying to get other players involved. When they cut me, I was hurt. I was like, "Oh, you wanted me to score and you didn’t tell me that?" They had told Coach Self they just wanted a guy to distribute the ball, but Jay Wright cut me and kept his own player.

Chalmers asks the right question: Why do you need a scoring point guard? If there are other players on the floor capable of putting the ball in the hoop with a degree of regularity, isn't it better to give them that opportunity?

For Scottie Reynolds, the lack of assists and high number of turnovers he generated in the role of a shoot-first point guard were perhaps what scared the NBA scouts away. Despite being a First-Team All-American, Reynolds went undrafted in the NBA and ended up spending the past season in the NBA D-League before spending his summer months playing in the Philippines (where he was ultimately cut in the middle of the playoff finals).

The scoring point-guard role caused NBA scouts to view Reynolds as an undersized shooting guard, and one who was perhaps not as athletic as the Kobe Bryants and Dwayne Wades he would be asked to match up with as a pro. As a senior, he produced career numbers in more than a few categories, but still only registered 3.3 assists per game – a number that was down from his freshman-year average of 4 assists per game.

Last season no player in the top-40 for assists in all of college basketball averaged less than 5.1, and their assists per 40 minutes (which more accurately represents the assist rate of the player) was usually much higher. At the same time, no Villanova player averaged more than 4.8 assists per game. Corey Fisher led the team in that category.

There is some good news, however, though Fisher lead the Wildcats with 4.8 assists per game to Maalik Wayns' 4.5, Wayns' assists per 40 minutes was higher: 6.0.

Will Wayns be able to improve his assist numbers this season with a coach whose clear preference is for his point guard to shoot the ball? Wildcat fans better hope so, because with Dominic Cheek on the wing and Mouph Yarou down low, the 'Cats aren't lacking options for the sophomore guard to dish to.

One-dimensional offenses can outwork dramatically overmatched opposition, but come Big East play and the postseason after that, a team needs some balance to succeed. That balance is disrupted if the point guard doesn't have some help off the ball.

As Chalmers said: What do you need a scoring point guard for when you’ve got all these other scorers?

Assists are a good thing. They mean someone scored.

Definitely check out the link to the source of Chalmer's comments. He was telling the Pan Am games story in the context of a larger story about the 2008 NCAA tournament match-up between Villanova and Kansas in the Sweet Sixteen.