Cats' vs. Hawks in an Un-Holy War

Share All sharing options for: Cats' vs. Hawks in an Un-Holy War 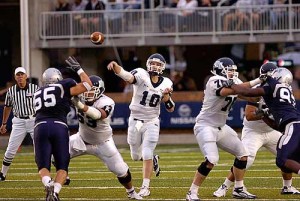 The Wildcats spent 44 straight weeks in the Sports Network’s Top-25 poll, dating back to the 2008 season. They opened the season with an optimistic number 14 ranking which dropped to 20 after one week. This week, after two consecutive losses, they will play as an unranked team.

Nonetheless, Villanova is expecting a sell-out crowd on Saturday afternoon to watch their first ever meeting with Monmouth University on the gridiron. The Monmouth Hawks hail from the short-scholarship Northeast Conference, and have had modest football success in the 19 years that they have fielded a team, though the NEC has only recently qualified for an automatic FCS Playoff bid.

Monmouth is most notable for producing the Dallas Cowboys’ star receiver Miles Austin. Austin signed with Dallas as an undrafted free agent in 2006 and has subsequently made it to two Pro-Bowls after breaking out. The program is also notable in the way it scored the first two points in the history of the program when their defense picked off a pass on a two-point conversion and returned it for a score.

The Hawks are coming off of a bye week after opening the season with a loss to Lehigh, one of the stronger Patriot League programs. Monmouth comes into this game looking to rebound, but the level of competition gets tougher for them; they have never beaten an active member of the CAA. They are 2-14 against current CAA members, with the two wins coming against Towson in 2001, while they were a Patriot League member and against Old Dominion in 2009, in their first season fielding a team. 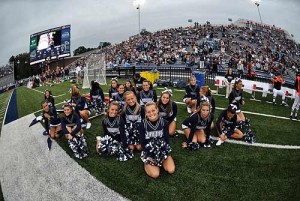 Monmouth hasn’t won a non-league game since 2009, and Villanova will not want to be the opponent to break that streak.

The 49-24 rout on September 3 uncovered a lack of size and speed in their secondary that allowed Lehigh to break off a number of big scoring plays. Their base defense is the 4-3 and the star is senior Free Safety Jose Gumbs, an undersized but hard-hitting centerfielder who can make plays and is the leader of the defense.

Their defensive line features two talented defensive tackles in Jimmy Lawson, a sophomore, and Austin Kugler, a junior. Much like the Wildcats, the defensive line is the strength of the Monmouth defensive unit. Senior linebacker Chris Mastrangelo is the top returner at that position after recording 66 tackles in 2010.

That is what Villanova’s true freshman quarterback, Chris Polony will have to work against. He will have the same inexperienced and undersized offensive line that made things difficult in the first two games and less depth at the receiver positions; in addition to Norman White who was out for the season, sophomore Joe Price will sit out indefinitely after being injured last week, and senior slot receiver Mikey Reynolds may not be available either as he was left off of the official two-deep depth chart for this week.

"We're excited about Chris," Coach Talley told the Inquirer. "He gave Dustin [Thomas] a run for his money during the preseason, and we're high on him. He's poised, has a good arm, and he's smart. We just have to spend some time to get him ready."

Hopefully the Wildcats will be able to establish a running game early on to take the pressure off of Polony’s arm. The four-headed rushing attack managed 181 yards against Towson, just slightly more than the two quarterbacks (Dustin Thomas, now injured, and Christian Culicerto) were able to gain through the air. Lawrence Doss, a senior running back leads the team after two weeks with 102 yards on the ground, 71 of which were earned against Towson.

Offensively, Monmouth is lead by quarterback Kyle Frazier, a senior who was both the leading passer and rusher for the Hawks against Lehigh. He passed for 225 yards and completed 22 of 39 pass attempts but did not score a touchdown, and he also rushed for 28 yards on 11 carries. The Monmouth running game totaled 102 yards, but no back was able to light up the Lehigh defense. After Frazier, the top rushers were junior running back Peter Nagy, who ran for 19 yards on 6 carries and senior back-up quarterback Craig Peterson, who ran for 17 yards on 2 carries.

Frazier’s favorite target appears to be senior tight end Tyler George, the top returning target from 2010, who caught 8 passes for 72 yards in week 1. Sophomore wide receiver Mitch Pollard can also be a factor, logging 44 yards on 4 catches against Lehigh and being the top returner at his position.

Despite throwing the ball relatively well against Lehigh, all three Monmouth touchdowns were earned on running plays, and they appear to be the type of team that will look to keep it on the ground and punch the ball in from the red zone — a strategy that could work to Villanova’s advantage on Saturday. Frazier will have to air the ball out to test a secondary that gave up it’s fair share of big plays against both Temple and Towson so far this season.

On the ground, a lack of experience at linebacker could also be an area of attack for the Monmouth offense. Villanova's linebackers are lead by true freshman Dillon Lucas who has 19 total tackles, including 10 solo stops, including a tie for the team lead in tackles last week with 10. Devon Bridges, a 5-11, 230-pound junior has also turned in some strong performances at linebacker with 10 tackles and a team-high two sacks so far this season.

Monmouth is a team that is having similar struggles to Villanova in the early going. Against Lehigh, they gave up 529 yards and allowed the Engineers (what's this about a Mountain Hawk?) to hang 49 points on their defense. Lehigh is a strong program and the 'Cats may not be able to perform as well agains Monmouth, but the Hawks are by no means a juggernaut.

Villanova will take this opportunity to see what the young Chris Polony can do, and though he may not have a full-strength receiving corps to work with, the coaching staff is very high on his potential. Chances are, however, that Polony will struggle somewhat on Saturday and perhaps during the remainder of the season. The key will be to limit the opportunities he is given to make mistakes.

The Hawks scored quickly against Lehigh, driving downfield to take a 7-0 lead on their first possession. They will look to start strong against Villanova as well, but the Wildcats can't play like they have an insurmountable deficit to overcome and win. Instead, they need to maintain composure and find the holes in the Monmouth defense to attack.

Monmouth has good size on both lines, and the 'Cats will need to step up to win battles in the trenches.

Most importantly, perhaps, is to limit turnovers and get stops on third down, two areas where the 'Cats could use the most improvement. Against the first two opponents, promising drives were ended by either fumbles or interceptions on a few occasions, and opposing possessions were often extended.

"That’s what we are looking to do is, to get some turnovers, get some short fields, and take advantage of our opportunities and not turn the ball over," the coach told CBS Philadelphia. "Let’s play a clean, crisp game. And I think we are getting close to that and hopefully that will happen this Saturday night."

This could be a closer game than many of us would hope. The Wildcats are still working through growing pains this season and a rash of injuries on offense hasn't much helped the situation. The increasingly younger Villanova offense will have to learn to be effective against the Hawks this weekend. If not, the 'Cats losing streak could very well be extended.

- Villanova is 20-6 in home openers at Villanova Stadium during Andy Talley's tenure.

- The Wildcats have gone 23-2 in their last 25 games on the Main Line, the losses coming against James Madison in 2008 (on a late hail mary) and New Hampshire last November.

- Over the last 10 seasons, the Villanova Wildcats are the win- ningest team in the CAA. From 2001 to present, Villanova has posted an 82-42 mark for a .667 winning percentage.

- Mikey Reynolds was left off the official two-deep depth chart for this game, but his availability has not been confirmed or denied by the coaching staff. No injury has been reported and announcements regarding suspensions are made on the day of a game, per Coach Talley's policy. Keep in mind that Kevin Monangai was listed as the starter at tailback prior to week 1, with Jamal Abdur-Rahman backing him up, but it was clearly Lawrence Doss and Austin Medley filling those roles.

The game will kick off on Saturday at 3:30 pm from Villanova Stadium.