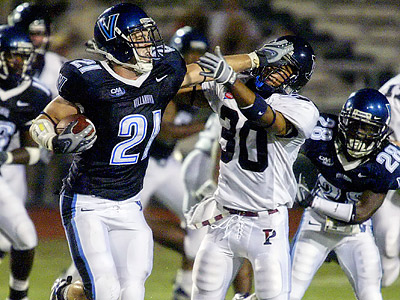 The Quakers have been shaking in anticipation of an opportunity to break that losing streak, which took a hiatus from 1911 to 1980 and then again until 1999, so the Wildcats haven't racked up 100 victories in that time (or 96 if you factor in the football-less years from 81-84. Still, their losing streak has been rather long, and they are hungry. After winning the first five meetings before 1911, the Quakers have lost the last 10.

The games have generally been close, with an average point differential of 2.3.

Last week, the coaching staff went to the true freshman quarterback, Chris Polony with the start, hoping he would perform well and establish himself as the quarterback of the future. Polony struggled through the first quarter and into the second, completing only a quarter of his passes, for two completions and 12 yards and an interception. Mercifully, he was pulled from the field in the second quarter.

The walk-on senior Christian Culicerto took his place and will start this week while Dustin Thomas remains sidelined. Culicerto completed 48% of his passes for 183 yards over the remainder of the game. Polony will likely still take some snaps in the Penn game, however, on "every third or fourth series," according to coaches.

The Wildcats' offense didn't get much done in week 3, but the running game had been a strength prior to that. Austin Medley appears to be breaking out the last two weeks, breaking off long runs and showing some speed and elusiveness. Medley was slated to start against Penn, but is suffering from a back injury that might sideline him this week.

Dorian Wells is now the shining star of a suddenly-depleted receiving corps. He racked up 98 yards receiving against Monmouth on 6 receptions. He now leads the team with 147 receiving yards for an average of just-under 50 per game.

Nonetheless, early defensive faltering in each game have lead the 'Cats to throw the ball and work for the comeback.

On defense, one of the brightest spots has been true freshman linebacker Dillon Lucas, who leads the team with 27 tackles. He also has 1 sack on the season. Another true freshman, Joe Sarnese, made his first career start last week at safety and took advantage of the opportunity, recording a game-high 10 tackles (8 solo).

Last week, Penn used three players at Quarterback and were lead by Billy Ragone, who passed for just 91 yards in a 37-12 blow-out loss to the Lafayette Leopards. Penn put up 170 yards in the air and 185 on the ground and committed three turnovers in that game — two on Ragone interceptions. Ragone compiled 834 yards through the air and 577 yards on the ground in 2010.

Ryan Becker is a more traditional quarterback who collected 548 yards in limited action last season. He threw for 49 yards on 11 attempts last weekend and might again see some action this weekend.

The Penn running game was lead by junior Brandon Colavita, who ran for 67 yards on 14 carries. Colavita led Penn with 728 rushing yards last season, and was third in the Ivy League. Ragone was the second leading rusher with 52 yards on the ground from just 9 carries.

Through the air, the Quakers top targets were Joe Holder with 47 yards last week, and Luke Nawrocki, who caught the ball 3 times for 43 yards. Seven receivers caught a pass and four had at least three receptions against Lafayette.

Like Villanova, Penn is working with an inexperienced offensive line where the Quakers will start four underclassmen.

On defense, the Quakers were hit hard by graduation in their defensive backfield, while linebacker has been a comparative strength. Senior LB Jason Rasmussen was the team leader in tackles last week with 7. No Penn players recorded an interception last weekend.

"If we make the same mistakes this week that we made last week, we’ll get trampled."

This is a match-up of two teams that are desperate for a win. Villanova is looking to end its slide this season, while Penn is hoping to end its own trend of losing in this series. Both teams suffered significant losses to their rosters from last season, but entered the preseason with high hopes of being competitive this season.

"We've struggled to put points on the board, and to challenge teams, and to put pressure and stress on teams. We have not been able to move the ball," Coach Andy Talley said.

"We're in a rebuilding stage right now, and we're not going to continue to talk about that. We're a young team that we hope gets better each week."

This is Villanova's last opportunity to score a non-conference win and it will be important for the young players and Culicerto to execute against a similarly-young opponent. Penn may ultimately bounce back from their rough start to the season to make some noise in the Ivy League schedule, but they look weak right now after being trounced last week -- and Villanova needs to take advantage of the situation to get things back on track.

Key will be limiting turnovers and converting third down opportunities – both have been weaknesses for the 'Cats this season. If they do, they have the speed, athleticism and raw talent to beat an inexperienced Penn team. If they do not, it will be another low point in what could be a very disappointing season.

The game will kick off at 7:00pm tomorrow from Franklin Field in Philadelphia.

Radio: 950AM in Philadelphia and streaming on Nova Nation All-Access.