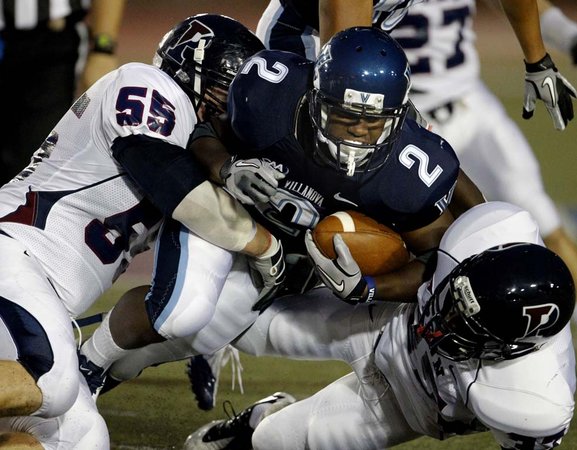 In last night's "Schuylkill Showdown," which headlined two of Philly’s best win-less college football teams, Villanova (1-3) finally won for the first time since its playoff loss to Eastern Washington on December 17. They outlasted Penn (0-2) by a final score of 30-21. The loss marked the Quakers tenth straight to the Cats in an exciting game played in front of 10,000 at Franklin Field.

The game was close from the beginning in a see-saw battle. Penn scored first on a one-yard run by Brandon Colavita. Villanova answered with a field goal after an inspired Quaker goal line stand, followed by a Dorian Wells 54 yard scoring reception pass from Christian Culicerto. Penn then added another running touchdown followed by another field goal by the Cats to end the half with Penn leading 14-13.

After a 31-yard field goal by ‘Nova’s Mark Hamilton, Villanova’s defense would provide the scoring over the final 21 minutes of the game. It began with James Pitts 26 yard interception return, increasing Nova’s lead to 23-14 with 2:00 remaining in the third quarter. The Quakers then closed to 23-21, on a 10-yard touchdown pass. The Wildcats sealed the deal with 12 seconds remaining when Ronnie Atkins intercepted a Ragone pass and returned it 26 yards for a touchdown.

Penn had total offense of 377 yards against only 263 for Villanova (rushing 124, passing 139). However, Villanova’s defense forced three Penn turnovers, resulting in 17 second-half points. The defense-led offense began when the Cat's DE Rakim Cox recovered a Lyle Marsh fumble at Villanova’s 31-yard line, leading to a Mark Hamilton field goal. That preceded the two "pick six" interceptions run backs for Pitts and Atkins. Villanova Coach Andy Tally said afterwards, "It was another typical Villanova-Penn game. It could have gone either way." Villanova’s kicker, Mark Hamilton, hit three field goals during the game, including a 41 yarder. He now has nine straight field goals going back to last season.