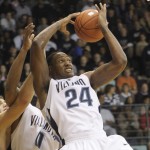 Corey Stokes will be joining BBC Bayreuth of the German basketball bundesliga in time for Oktoberfest. Last season's Pro A (second division) champions were working out Kelvin Torbert, a former Michigan State guard, on a four-week trial before ultimately deciding to bring in Stokes just prior to the start of their season. Torbert was good offensively, but the team wasn't happy with his scoring instincts. They wanted a player with more of a "killer mentality," which lead them to the lights-out shooting Villanova guard.

"Corey Stokes is a shooting guard that can be used because of its size but also on several items. He's an excellent shooter and will bring us the dangers still required from beyond the three-point line," BBC general manager Uli Eichbaum told AFP (roughly translated).

Stokes will be available for the team in their season opener against Ulm on Monday.