The Sports Network, a news organization that also produces the most-respected FCS football poll, today announced the inaugural Jerry Rice Award Watch List, and Villanova freshman linebacker Dillon Lucas is one of the 15 players named. The award, named after the famed receiver, will be given to the most outstanding freshman in the Football Championship Subdivision. 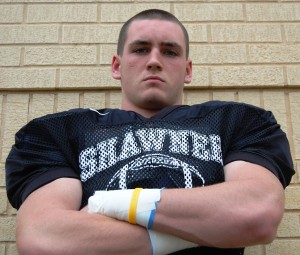 The 6-0, 215 pound Lucas is a native of Medford, N.J., and a graduate of Shawnee High School. Lucas has started all four games for the Wildcats and currently leads the team in tackles with 36 total stops, including 21 solo tackles. Lucas also had 1.5 tackles for loss and a quarterback sack.

The list could change dramatically between now and the end of the season. Some freshman players have barely emerged and others will see their contributions decline as the year presses on. A national panel of communications and media relations directors, broadcasters, writers and other persons included in the polling by TSN will select the award winner at the conclusion of the regular season. That panel is not restricted to voting on players included on the list.

Jerry Rice, a former Division I-AA player at Mississippi Valley State, will present the award in person at the national awards banquet on Jan. 6 in Frisco, Texas.