Share All sharing options for: Osei Switches to Temple

Normally Villanova can expect one or two football recruits to change their minds, and this year will clearly be no different. Bryan Osei, a defensive end from Abington High School in Pennsylvania, has now decided to change his commitment to Temple. 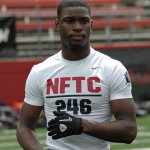 The 6-2 and 230-lb Osei is rated three-stars (a 76) by ESPN, and unranked by Rivals and Scout. He had offers from Kent State, Old Dominion and Stony Brook in addition to Villanova and Temple and had initially cited Villanova's proposed move to the Big East conference and academics as the reasons for his commitment.

Now, he tells the Philadelphia Inquirer, "I like that Temple's football program is on the rise and on the verge of doing big things. Also, it turns out that the school has a higher educational ranking for psychology [his intended major]."

Temple's psychology graduate program is ranked 50th in the nation by US News and World Report, but undergraduate programs are not ranked by subject in the liberal arts and sciences. Villanova does not offer a Ph.D. program in psychology and is therefore not included in US News' assessment.

Osei had been the 10th recruit in Villanova's 2012 class (which would have likely capped off at 11 members). He informed the Villanova coaching staff of his change of heart over the weekend. Stacey Bedell, a speedy running back from Long Island also de-committed recently after citing academics and Big East potential as reasons he liked Villanova.

That common thread might be the real reason why the Villanova class is shedding recruits faster than a Concorde jet crosses the Atlantic. The Wildcats initially received many of these commitments when there was a much higher level of confidence that the football program would be moving to the Bowl Subdivision (FBS) and the Big East conference. Without that, the Wildcats are just an FCS school that had some recent success but is struggling to get through the 2011 season.

Villanova now has 8 known verbal commitments for the 2012 class, with no word yet on whether or not linebacker Corey Majors will be joining the program after his prep school year is over. The recruits still committed to Villanova football are: