Talking about the Tribe

Share All sharing options for: Talking about the Tribe 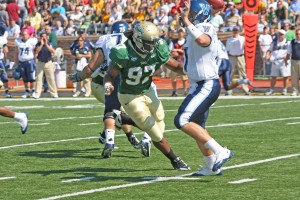 William & Mary has one thing in common with Villanova, both schools opened conference play with a loss. William & Mary, however, picked up two wins out of conference and though they have dropped in the rankings, remains ranked 11th in the polls heading into Saturday's bout on the Main Line. The Tribe has wins over VMI and Division-II University of New Haven and losses to UVa and James Madison.

The last time William & Mary beat Villanova on the Main Line was in 2000 in a 48-41 overtime game. The Tribe is 4-10 playing in Villanova Stadium.

W&M's passing game was stagnant in the first three weeks, but finally picked up last week in their loss to James Madison. Sophomore quarterback Mike Graham was able to lead the team on two long scoring drives and make good use of previously-injured junior wide receiver, Ryan Moody, who caught three passes for 82 yards. Moody's return will force the Villanova secondary to adjust its coverage — he was a second-team all-CAA selection last year.

Senior receiver D.J. Mangas also had a big game against JMU, totaling six catches, 102 yards and a touchdown. Moody's threat certainly opened things up for Mangas on the other side of the field, as does a running game lead by Walter Payton candidate, Jonathan Grimes.

Defense has always been a strong suit for Jimmy Laycock's team, but has struggled a little so far this year. The Tribe lost star linebacker Dante Cook early in last week's game to an injury. Junior Brian Thompson will move from safety to outside linebacker this week, and sophomore Jerome Couplin will take over in the secondary.

Villanova will again start Christian Culicerto, a walk-on senior, at quarterback. Culicerto played in a Wing-T offense in high school, and has had to adjust to Villanova's offense since arriving on campus.

"The biggest adjustment for me was the spread offense," Culicerto told the Pottstown Mercury. "I only threw the ball four or five times a game. We were a running team."

When he runs, he often looks a bit like Chris Whitney — he doesn't slide as much as Andy Talley and offensive coordinator Sam Venuto would like.

‘I’d probably slide more if I hadn’t watched Chris Whitney run over people for three years," Culicerto said. "I’m not as big as he is, but that’s just the competitor in me. I want to do whatever I have to do to help my team win."

Villanova has a more balanced attack, at least in theory. Until last week, most games split between passing calls and rushing playcalls were split close to 50/50. Against Penn last weekend, there were only 20 passing plays called and 38 carries; not quite the Wing-T, but Villanova is leaning a bit more on a rushing game that has been lead by Austin Medley and Kevin Monangai, both freshmen.

Medley sat out last week with a back injury, but it was not expected to be a multi-week injury.

Without Norman White or Joe Price, the passing game has relied on Dorian Wells, a junior who had 70 yards and a touchdown against Penn, and Mikey Reynolds, a diminutive slot receiver. Both players have been effective at picking up yards and helping Culicerto to succeed.

The offense also managed to cut its turnovers down last week in the victory, with just one. Culicerto threw a single pick in the game.

Nova's defensive line is starting to live up to the hype as of last week. Rakim Cox was credited with six tackles (three solo), 2.5 tackles for loss (-14 yards), one forced fumble and one fumble recovery against the Quakers.

Two fresh faces have stepped up on the defense, however, to really shine. Dillon Lucas, a linebacker out of Shawnee High School, has performed so well that people have begun to take notice and he was included on the initial watch list for the Jerry Rice Award. Lucas leads the team in tackles. Free safety Joe Sarnese got plenty of special teams opportunities in the first two weeks, but logged his first start in week 3 against Monmouth. In his two starts, he has recorded 17 tackles and partially blocked a punt against Penn.

William & Mary is probably a team that is better than their record. They have struggled a bit to live up to some very lofty expectations early in the season, but they are a very talented team that is in the process of searching for it's identity. Villanova, meanwhile is looking to build some momentum and get into the heart of CAA play on a high note.

The key to winning last week was the adjustment to rely on the running game and the ability of Christian Culicerto to manage the game and help limit turnovers. If that continues, the Villanova offense will be able to give the defense a chance to breathe and will score at least a few points.

With each passing week, the experience levels for the freshmen players is growing and they will hopefully become increasingly more comfortable in the roles they have been handed.

The Tribe have started to get their passing game on track again and have one of the top running backs in the CAA (and possibly all of FCS). They will be a real test for the Wildcats defense to try and manage.

On the other end, William & Mary have been hit hard by injuries on their defense and particularly at linebacker and safety. It could be a good opportunity to test their defense up the middle, especially with the running game.

The games only get more difficult from this point on, but Villanova won a tough game against Penn last week and may be about to turn the corner on this season as well. Culicerto is ready to play, and while he might not be a spread-offense superstar, he is a solid option for as long as the 'Cats need him.

If William & Mary continues to struggle, Villanova can certainly take advantage and win this game. If they awake from their slumber and play to their preseason rankings, they will be a big handful for a 'Cats team that has to win six of the next seven games (most likely) in order to have hope of a return to the postseason.

Saturday game will kick off at Noon from Villanova Stadium and will be televised live by the Comcast Network and will also air on Comcast SportsNet New England and on Cox 11 in the Tidewater area. Marc Zumoff and Kevin Reilly have the call.

The live radio broadcast of every Wildcats game can also be heard on the air and online at Villanova.com. Joe Eichhorn and Ryan Fannon will have all of the action as the game is broadcast on 950-AM ESPN Radio.