Share All sharing options for: Full Membership for Temple?

(UPDATED 10/2)How times have changed. 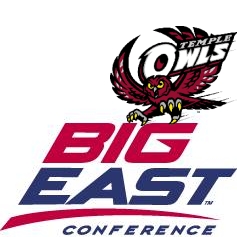 According to Mike DeCourcy of the Sporting News, Sunday's Big East meeting in Washington, D.C. will include a vote on whether or not to offer Temple University a full membership in the league. Temple has always been on the Big East radar as a strong hoops program within the northeast corridor, but Villanova's presence in the Philadelphia market had previously kept the Owls out of the league. That could change in the next week or two, however, as a previously abysmal Temple football program has seemingly turned a new leaf and is putting together a stellar season that will likely give the school it's third winning season in a row. DeCourcy wrote:

Meanwhile, a source close to the Big East said that league is expected to vote on offering Temple full membership in the league at its secretive presidents’ meeting Sunday in Washington, along with demanding a more firm commitment from restless members Connecticut and Rutgers.

Villanova would hardly want their crosstown rival in the same basketball conference, but there is little that the Wildcats can do to stop the move, other than make a strong case for their own football program.

This news flys in the face of a claim made my University of South Florida president Judy Genshaft this week, where she claimed that the Big East would not consider schools in the same state as current members.

Expansion however, is driven by football and there is no Big East football school in Pennsylvania (once Pittsburgh departs).

Now, that Pennsylvania football school could have been Villanova, and prior to the departure of Pittsburgh and Syracuse, it was perhaps more-likely. Now, the conference might be feeling rushed to expand, and unwilling to wait for a Villanova program to make the transition from FCS.

Will Villanova football also be voted on? Nobody is currently reporting that it will, and since Father Peter Donohue will be Villanova's only representative at the meeting, it is more difficult to tell how hard he will campaign for that move. It is certainly more likely that he would push for a Villanova football invitation if the league appears to be reaching stability and new exit fees or other precautions were taken to ensure that stability prior to expansion talk.

Stability might be very far from the Big East's status, however. TCU is back on the Big XII radar, and other reports have Louisville, Cincinnati and West Virginia on that list as well — and West Virginia, at least, is anxious to leave the conference if a suitable option were available.

Before the Big XII can expand, however, it needs to lock down it's own stability. While a plan involving exit fees and media rights was laid out not long ago, the schools have not contractually bound themselves to those terms just yet. Missouri will hold a Board of Curators meeting on Tuesday to discuss their intentions, and may empower their president to move the school to the SEC, or decide to stay put.

A scenario where Temple joins the Big East as a full member is not the worst-possible scenario for Villanova, but it is far from the best one. The 'Cats would be competing for media attention, fan dollars, and recruits with a school in the same major metropolitan area. Is there enough to go around?

(Update 6:45p) Villanova sources indicate that they do not expect Temple to be on the agenda for tomorrow's meeting. Sunday's meeting is designed to find out who will commit to the conference for the future. Our source called the meeting a "waste of time," since nobody is likely to admit their intention to leave for another conference (except UConn).

The football schools will discuss Navy and Army as members but it is currently doubtful that either will commit without knowing that the conference will survive with most of it's current members.

Pittsburgh and Syracuse were not invited to the meeting and was TCU invited as an observer, but will not vote.

(Update 10/2) Today's meeting will last until around 3:00pm. The agenda includes a discussion of increased exit penalties and it is expected that some Presidents will ask for a long-term TV-rights commitment like what the Big XII discussed and that they hope to implement soon.

Basketball Season is right around the corner. This post has been sponsored by Pro Dunk Hoops.