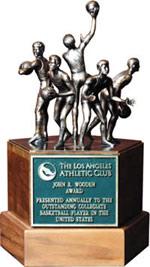 The Wooden Preseason Top 50 was released today by the Los Angeles Athletic Club and Villanova's Maalik Wayns is on the list.

About the John R. Wooden Award

Created in 1976, the John R. Wooden Award is the most prestigious individual honor in college basketball. It is bestowed upon the nation's best player at an institution of higher education who has proven to his or her university that he or she is making progress toward graduation and maintaining a minimum cumulative 2.0 GPA. Previous winners include such notables as Larry Bird ('79), Michael Jordan ('84), Tim Duncan ('97), Candace Parker ('07 and '08) and Maya Moore of Connecticut ('09 and `11). BYU's Jimmer Fredette won the men's Award in 2011.