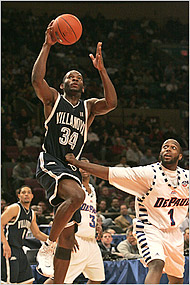 After playing out his final season of college eligibility on a reconstructed knee in 2006-07, Curtis Sumpter left the Main Line with dreams of making it to the NBA. He was a productive player as a redshirt senior, leading the team in scoring average and rebounds, despite playing alongside a young dynamo named Scottie Reynolds and a future NBA forward in Dante Cunningham. Sumpter had some buzz from NBA people not long before that, and while an injury suffered in the 2005 NCAA tournament had held him back, he hoped to catch on somewhere.

The draft came and went without hearing his name called. His phone did ring, however, and the Denver Nuggets eventually invited him to play for their summer league team, but they didn't have a spot for him after the summer. Then the Clippers invited him to their training camp, but they too could not find room.

After his brief NBA experience, Sumpter headed overseas to continue his playing career, with stops in France, Germany, Greece and Belgium. He spent last season with Maroussi B.C. in Greece and returned to the United States after his contract there ended in May.

"First off my goal is to make it to the NBA," Sumpter said. "I played in Europe for five years, and it just wasn't for me."

Sumpter knows that an NBA bench might not be his next move, but he is willing to work out and go through the "D-League," where Scottie Reynolds played last season. It is the de facto minor league for the NBA, and teams will often pull players from D-League rosters during the season, as rookies falter or regulars go down with injuries. A strong performance there, can earn a shot on the big stage.

In the meantime, however, Sumpter has another goal: to represent the USA at the 2011 Pan Am games. The games take place in Guadalajara, Mexico at the end of the month.

"I played in the Pan Am games back in 2004 with the 21-and-under team in Halifax, Canada where we took First place," Sumpter recalled. "It was a great experience to represent my country and I'm looking forward in participating in it again at the end of the month in Mexico. HopefullyI can win another Gold Medal!"

In 2004, Sumpter was a role-player on the junior national team. He averaged just 0.7 points per game off the bench over three games on a team that also featured current NBA star, Chris Paul, Adam Morrison, and Charlie Villanueva. That team beat had plenty of firepower and had comfortable victories in every game they played in Halifax.

In order to prepare himself for the games, Sumpter has returned to his old stomping grounds. Where he has been given open access to the training facilities and practice courts of the Davis Center.

"Currently I'm back at 'Nova a few days a week working out and preparing for the training camp in Oklahoma that starts in 2 weeks."

According to people in the Villanova Athletics department who have seen Sumpter working out, he appears to have finally regained some of the explosiveness that he exhibited in 2004-05. That was the version of Curtis Sumpter that was a burgeoning star on the court and a potential NBA talent. If those eyes do not deceive, Sumpter might finally be back on track to achieving his dreams.

The next step, however, is heading to Tulsa, Oklahoma, to try and earn his way onto the 12-man Pan American Games team. The final roster will be announced before the team departs on Oct. 23.