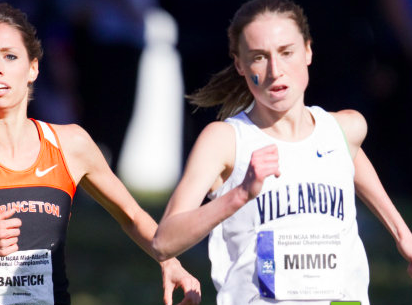 Villanova spent much of the last two years holding on to the top spot in the women's cross-country national rankings. This season, they opened with a preseason ranking of 5th nationally, behind Georgetown, who took the top spot, and Providence.

Last weekend, the 'Cats travelled to Bethlehem, Pennsylvania to compete in the Paul Short Invitational. Providence and Georgetown were also running the course and though the Hoyas would not send out all of their top runners, Providence took on the field at full strength.

Despite that, the 'Cats came in second place, largely on the strength of senior Bogdana Mimic, who finished first in what was her first race of the season. Villanova's unstoppable force, Sheila Reid, was held out of the race (not for any apparent reason).

Mimic was named the Big East Female Cross Country Athlete of the Week for her effort.

When the October 4, USTFCCCA Poll was released, the voters chose to reward the strong showing at less-than-full strength with the top-spot in their rankings. They moved up four spots in that poll and one spot in the northeast regional poll as well.

The Men's team dropped one spot in the poll to 19th and are the second-highest ranked program out of the Big East conference.