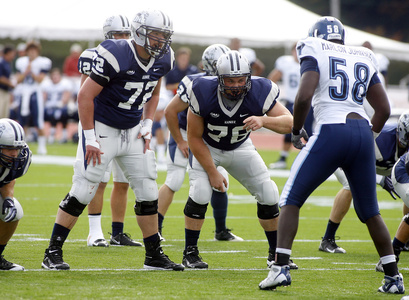 With all of the Big East drama, it is easy to forget that there is a football game on Saturday. Villanova will travel to Durham, New Hampshire to take on the Wildcats of New Hampshire, who are 3-1 on the season with a 1-0 record in the CAA so far. Their offense is among the most potent in Division I-AA, after being put in place by current Oregon coach Chip Kelly.

Villanova also runs an offense that was inspired by Oregon, but UNH has been far more effective with it this season, averaging more than 400 yards of offense this season. They are also scoring an average of 38.5 points per game. Their defense, however, gives up giving up an average of 43.5 points per game, which is inflated at least a little by their 58-22 loss to Toledo on opening weekend.

UNH quarterback Kevin Decker has passed for 10 touchdowns already this season to lead the offense. His top targets are wide receivers Joey Orlando and R.J. Harris who have each caught three touchdowns. Justin Mello has also done some damage in the passing game, leading their team in receiving yards with 107 last week on just two catches.

Decker is on the watch list for the Walter Payton award, which recognizes the top player in the Championship Subdivision. He was added to the list this week.

They are complemented by a rushing game lead by Dontra Peters, who has rushed for 232 yards and averaged a healthy 5.2 yards per carry in a pass-happy offense. He ran for 157 of his team's 210 yards against Villanova last season. He also returns kickoffs for an average of 25 yards per return.

Defensively, they are lead by Matt Evans, a junior linebacker, who has 63 tackles through 4 games and 1.5 sacks. Evans is the top tackler in FCS this season and has earned a spot on the Buck Buchanan award watch list for the top defensive player.

As many stops as they have gotten so far, the New Hampshire defense still has a tendency to give up big plays.

"Defensively, as much as we want to be better and we want to get better, there have been signs of improvement," head coach Sean McDonnell told the Concord Monitor. "[After the Holy Cross game] I said, 'We got it under 40 this week,' and it didn't get a lot of smiles from some people, but if you look at it [we're getting closer]."

"Well, they are (averaging) 38 points a game on offense, very high scoring and quick hitting. And we are only scoring about 13 a game." Andy Talley told CBS Philadelphia. "We really need to improve on offense, and hopefully we will as the kids get older. But it’s going to be one of those games, we have to go in and play great defense and hopefully control the football a little bit to take some time off the clock."

The Villanova offense that has averaged around 13 or 14 points per game this season will be undergoing a bit of an overhaul this week. Starting in the trenches, the coaching staff has decided to pull true-freshman Kyle Wallace out of his role as the starting left guard. Instead, Ross Hall, who is at least 15 pounds heavier and has a year longer in the program will get the start. Hall was nursing a shoulder injury at the start of the season.

In order to get more firepower into a passing game that has lost two of its top receivers in Norman White and Joe Price, the 'Cats have also made changes to the receiving corps. Mikey Reynolds will no longer start as the slot receiver; the senior has been replaced there by true-freshman Jamal Abdur-Rahman on the depth chart. The coaches have been looking for ways to get Abdur-Rahman the ball, especially in a crowded backfield, and it appears they will try him out as a full-time receiver.

Reynolds will still get some action in the game, as he is likely to be used in the slot situationally and whenever Abdur-Rahman is lined up as a tailback.

There will also be a change at tight end, where Morgan Craig, a big bodied blocker, will be replaced by fellow true-freshman, Earnest Pettway. Pettway is believed to bring more to the passing game and is an all-around athlete who played high school basketball as well as football.

On defense, Marlon Johnson should return from an injury this week. Craig James, however, is considered "questionable" for the game, which likely means that Eric Loper will again take his old position at cornerback, sliding over from safety. That move pushes sophomore John Maughan and freshman Shane Harris into service at weakside safety.

With the offensive changes and UNH's defensive struggles, one hopes that the Wildcats can take advantage this week in Durham. The 'Cats will hope that better protection and more options in the receiving game will make their attack as potent as the others that UNH has faced thus-far, and help to get a struggling unit back on track.

Defensively, the 'Cats will rely on a number of freshmen to be ready to play. The UNH offense is tough to stop, but it is not dissimilar to the offense that Villanova themselves run, meaning that the defensive unit should be prepared to handle it — in principle. The actual execution of stopping the UNH attack could be trickier.

Nova will need tight coverage from the secondary and some linebacker help in controlling Peters as well. Pressuring the quarterback and getting into the backfield will help disrupt the passing game and should clearly be priorities.

In a battle of the Wildcats, the New Hampshire version comes into this match-up in far better shape. In CAA games, however, the shape you are in means very little. Rhode Island upset Villanova last season despite their disadvantage, and a well-prepared Villanova team can perhaps overcome some struggles to take home a victory as well.

Just don't go to Vegas and bet on it.

This game kicks off from Cowell Stadium in Durham, NH at noon, on Saturday, October 8, 2011. There will be no television coverage of this game.