I will be replacing this post with a full "Expansion Apocalypse" update later tonight or tomorrow. 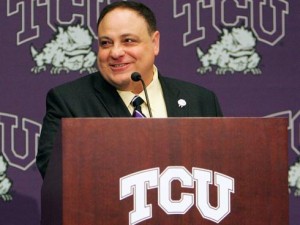 Thanks to the virus/hack/technical-shenanigans issues we have been having, I wasn't able to provide any updates after Friday morning's post about the Big East conference call. Though sources on Thursday night suggested that the agenda for the call could have included voting on invitations for UCF and ECU, but that clearly wasn't the purpose of the call.

Instead, the Big East presidents spent Friday morning discussing a plan to increase exit fees from the conference. A necessary move if the league intends to present a strong face publicly and begin the process of rebuilding with strong additions. According to the Newark (NJ) Star-Ledger:

The Big East's current exit fee is $5 million, but with the recent defections of Pittsburgh and Syracuse to the Atlantic Coast Conference, there has been serious talk of raising it significantly. While no new exit fee number was set on the morning call, there appears to be unanimous support in raising it, so as to prevent further schools from bolting to other conferences.

Sources at Villanova have indicated that there has also been discussion of adding a far-more-serious penalty to exiting members, based on turning over television rights to the league. So far, however, no agreement has been settled on by the conference — just an agreement to agree.

Meanwhile, a sports-talk radio station in Kansas City (810-AM) is reporting that West Virginia AD Oliver Luck has been phone-stalking the President of Kansas State University, who is the chairman of the Big XII's expansion committee. Luck has been exhaustingly-begging for an invitation for WVU to join the Big XII.

It doesn't appear that the Big XII plans to make any more moves until they know whether Missouri is going to stay or go, however.