Share All sharing options for: Idaho Ripping off Villanova 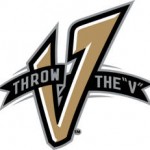 "Throw the 'V'!" sounds like something you might hear in the student section of the Pavilion on a Villanova game day. It is also the slogan being used by University of Idaho athletics department marketers to try and promote their teams and generate fan interest, engagement and excitement.

"This is about Vandals connecting with other Vandals, showing their pride and building a tradition," said Rob Spear, Idaho's director of athletics. "We are the only Vandals in the nation and our pride in who we are and what we represent is unsurpassed. That’s what the ‘V’ symbolizes: as an institution we are unrivaled in the impact we have on our great state of Idaho and beyond. Our students come here to lead and succeed."

Of course, while they may be the only "Vandals" in the nation, they are hardly the only school using a "V" as it's symbol, and really, in that regard they are the new kids on the block. Undeterred, Spear intends to sell the "V" hand-gesture as a unique symbol of Idaho's sports fans.

"We heard from fans – passionate about their alma mater, who wanted something distinctive," Spear said. 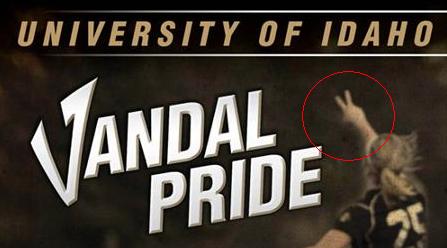 According to Nick Popplewell, the Idaho director of marketing, "You look at Texas with the ‘Hook ‘em horns’ as well as Arizona State with the pitchforks and our students are so creative. You have to think about what it means to us as Vandals and what it signifies." 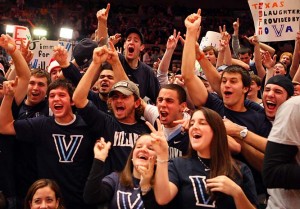 Villanova, of course, has been using the "V" hand-gesture for years now, and with numerous appearances on national television, it is no secret that Villanova students and fans have staked a claim to the gesture. The University of Idaho can't prevent Villanova from using the gesture and neither can Villanova stop the Vandals. A hand gesture is not subject to trademark protections, and just as fans will often "borrow" the chants and cheers used by other schools, the University of Idaho can also borrow this gesture.

It would be nice, however, if they would refrain from claiming it as unique.

Either way, whoever started the "V" hand-gesture first, it wasn't Idaho, despite their claims of originality.