All your Knights are belong to us

Share All sharing options for: All your Knights are belong to us

Not many schools in major college football use the nickname, "Knights," but soon all three of them could be conference rivals in the Big East. Yesterday's Big East conference call moved from talk of exit penalties to expansion options, and in addition to discussing a 12-member football conference, the league may have moved the Knights of Central Florida to their expansion shortlist. Dick Weiss of the New York Daily News broke the story last night on Twitter.

If the three service academies also join the Big East, the conference would have the UCF Knights, the Rutgers Scarlet Knights and the Army Black Knights (Army uses "Cadets" in all other sports).

According to CBS Sports, the . He then, reportedly, initiated contact with the University of Central Florida and meetings could be scheduled as soon as next week.

(Updated 12:30p): Big East sources relayed to the New York Times that there is no expected action to invite or accept UCF (or any school) to the conference this week.

UCF has not been invited to the Big East yet, but an invitation could be coming as soon as this week. UCF has been campaigning for a move to the Big East conference for years now, and the Boston Globe believes they would be willing to accept an invitation, even if it is still likely that more Big East members will defect.

The Globe goes on to report that Temple may be the next target for the Big East, once UCF is on-board. Noting:

Once that happens, the Big East is likely to focus on Temple to gauge the interest in rejoining the Big East after an absence of 7 years.
All of these moves are part of an overall plan which the Big East hopes will raise its football membership to 12 schools. with Navy, Air Force, SMU, Houston and Boise State all being given attention. Villanova, which has expressed a desire to move from the FCS to the FB S level, is also on the Big East's target list.

As for Army's Black Knights? They are still on the list, but the Big East considers them a longshot to join after their failed membership in Conference USA.

UMass could be the biggest loser of conference expansion. I previously noted here that the Minutemen's football deal with the MAC conference was a limited one, and tied to Temple football in a number of important ways. UMass' contract did not go into effect, for example, until the MAC agreed to similar terms on an extension with Temple, and more importantly, if Temple exits the MAC, that conference's deal with UMass can be partially nullified.

According to that contract, if Temple withdraws from the league: 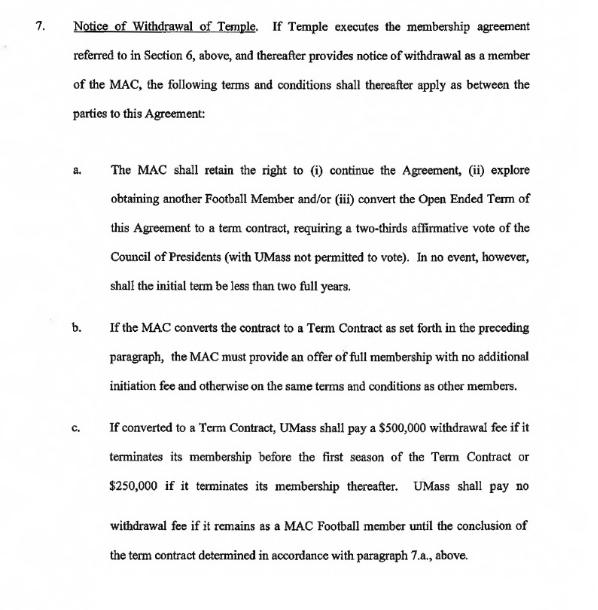 So, essentially, if Temple withdraws from the MAC to join the Big East, the Minutemen, who are already in the process of building up their program to the FBS level (and spending a significant amount of money to do so), may find themselves without a football home. The MAC could very well cut their deal short -- to two years -- meaning that the Minutemen could be unceremoniously booted from the MAC prior to the 2014 season if Temple is not still a member. While that possibility likely didn't seem all too real in March, when that contract was signed, it must seem very real now.

Temple is also bound to pay a (relatively-small) exit fee and provide two-years' notice before exiting.