Share All sharing options for: Power Play by Villanova Administration 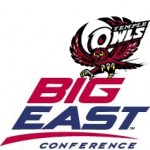 According to The Star-Ledger, Villanova administrators spent part of yesterday's conference call with the Big East insisting that Temple not be given full membership in the conference. The football schools would like to include Temple as a full member of the conference in all-sports, but Villanova is not interested in having local competition in hoops.

In Villanova's ideal world, Temple would be left out of the Big East in any sport, but given the state of the football conference, that is hardly an option. Villanova has little leverage to push it's agenda on the Big East, but the Temple issue is one area where the 'Cats do have some control. So it appears that the move, for now, is to block full membership for the Owls.

Temple is one of the very few schools that might be willing to join the Big East without any additional guarantees. The football schools, meanwhile have to get back to 8 full members playing FBS football once Syracuse and Pitt are no longer in the league, which is why Temple and it's strong basketball program are considered an option as a school that is willing to risk a ride on the Big East Titanic.

Other schools are scoffing at the Big East's overtures. There is plenty of interest in being a part of a re-built league, but only if the bleeding has stopped. Navy, Villanova and Boise State have all said that they would like to see a commitment from the six remaining football schools, that would include increased exit penalties or a grant-of-rights that would turn their TV rights over to the conference for a period of years.

Putting a block on Temple gives the Wildcats some bargaining power: If you want Temple, Villanova needs to get something. An invitation to upgrade in football and some financial guarantees regarding the league's future could be the goals.

The endgame could also simply be to keep Temple out of the Big East in basketball, but we would hope that Villanova's administrators are smarter than that. Having an option to get to the football table is vastly more valuable than a temporary block on Temple. Why temporary? Eventually the hybrid format will fail, and especially if the two sides of the conference are unable to compromise on these issues. If that happens, Temple basketball is more likely to be on a major stage than Villanova, unless the Wildcats can become a valuable member of an FBS football conference.

An relatively-intact Big East with Villanova as a football member is the best-case scenario. If that means that Temple will have to join them, it would be worth it as long as the playing field was kept level.

Big East commissioner John Marinatto got a firsthand understanding of the bad blood yesterday when he had a lengthy telephone call with officials from Villanova, which is considering moving up from the FCS to FBS level. Villanova is not pleased the Big East is considering inviting Temple, which already competes at the FBS level.

A Post source said the majority of that call deteriorated into 'Nova bashing Temple rather than making a strong case for the league to consider the Wildcats' potential in football.

ON A CONFERENCE call yesterday among the 14 Big East athletic directors, Villanova's Vince Nicastro, well-placed sources said, reiterated the university's position that when it comes to expansion, the conference needs to be cognizant of the marketplaces it's already in, as well as those it's considering entering.

The message is clear: Philadelphia already has a Big East presence. It just doesn't have one in football, at least not since Temple was asked to leave in 2004.

Of course this news has enraged Temple fans, who have been told by the same media sources that Temple's invite to the conference was imminent -- and perhaps in a sense it was. The Owls may have been one of very few schools willing to take a chance on a wounded Big East that still hadn't applied any legal or financial tourniquet. Navy balked, Boise State has balked and it would be no surprise if UCF balks in it's meeting with John Marinatto this week. UCF would have to pay a large exit fee to Conference USA in order to take a risk that the Big East might still fail.

Villanova needs to be more like Mike Kern's description and less like the version portrayed in the New York Post. Protecting your turf is a time-honored business tradition that everyone should understand. Villanova must protect it's turf and perhaps generate some leverage with the football schools. Sadly for Temple, they will be caught in the middle until a resolution can be found.