Duking it out with JMU

Share All sharing options for: Duking it out with JMU 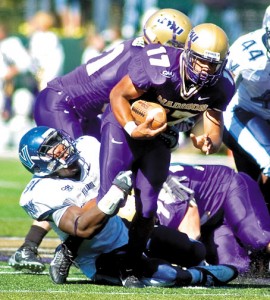 In their series against Villanova, James Madison holds a narrow lead, 10-9, and they will look to expand on that at their home field on Saturday. Villanova won the last two meetings between the teams. The Dukes have had a number of memorable showdowns with Villanova in recent years, but this season might not be a match-up of equals. JMU comes into the game at 4-2, and 2-1 in conference play, while the Wildcats are 1-5 with no conference victories in three tries.

The Dukes one CAA loss was to a surprisingly-good Maine team in overtime.

Villanova will start at least four true freshmen on offense and at least one redshirt freshman. Among them will be Chris Polony, who likely will make his second career start at quarterback. In his previous start against Monmouth, Polony was pulled in the second quarter as he struggled to get anything going in the passing game. He came in to replace an ineffective Christian Culicerto at New Hampshire last week, however, and performed well -- completing 15 of 19 passes for 120 yards and a touchdown (with two interceptions).

Jamal Abdur-Rahman is another freshman whose playing time has increased lately. In addition to returning kickoffs, he has also been starting games at slot receiver and taking a few hand-offs as a running back. He had 14 touches last week.

Among the pass-catchers, Dorian Wells has been the most consistent in the last few weeks. He has caught touchdown passes in each of the last three weeks and lead the team in receiving with 32 receptions and 312 yards. With Norman White and Joe Price out, and Mikey Reynolds seemingly out-of-favor, Wells has become the focal point of the Villanova passing game.

Redshirt freshman quarterback Dustin Thomas is working through rehab and has been throwing the ball again in practice. It remains unlikely that he will play this week, but coaches are calling it a gametime decision. Either way, he should be available to start the homecoming game against Old Dominion.

Theyre struggling, I guess, but theyve had their way with us around here, and were anxious to play them, JMU coach Mickey Matthews told the Philadelphia Inquirer. But theyve dominated us so bad, were not taking them lightly.

The Wildcats offense averages 14.8 points per game but defensive struggles have seen them give up 30.2 points on average. The defense ultimately needs to learn how to stop the big plays that have victimized it so far this season.

It doesnt help that the Villanova defense is lead by a true freshman, linebacker Dillon Lucas, who is one of 15 players nominated for the inaugural Jerry Rice Award Watch List for the best freshman in FCS football. Lucas has started all six games this season and leads the team in tackles with 53 stops and a sack. Fellow true-freshman Joe Sarnese has also been starting at safety the past few weeks and has performed well, leading the team in tackles on two occasions.

A two more freshmen have been pressed into service on defense. Linebacker Joey Harmon has been starting games alongside Lucas for the past few weeks, while an injury to sophomore CB Craig James has moved Eric Loper back to his old position on the outside from safety, and given freshman Shane Harris a larger role in the secondary. Harris is listed as the number-2 weakside safety after sophomore strongJohn Maughan/strong.

Junior Ronnie Akins has been a key player in the secondary so far, however, leading the team with two inceptions and making a number of good defensive plays.

James Madison, meanwhile is reeling a bit after being forced to suspend starting quarterback Justin Thorpe indefinitely for a violation of team rules and losing starting tailback DaeQuan Scott to a shoulder injury in a win against Richmond. Despite the losses, however, the Dukes will still present a tough challenge for a Villanova team that is desperately in need of a face-saving conference win.

Filling in for Scott, the Dukes went to Jordan Anderson, who performed so well that he has become the star of the JMU running game. Scott since returned, but Anderson has been getting most of the teams carries. Anderson ran 26 times for 212 yards and a touchdown against the Maine Black Bears, while Scott added 70 yards and another touchdown. They needed those ground yards more so because their passing game was struggling without Thorpe.

Redshirt freshman quarterback Jace Edwards, has started for JMU since Thorpes suspension. Edwards has done more damage with his legs than his arm, however, scoring rushing touchdowns against both Richmond and Maine. Lasst week he completed 13 of 17 pass attempts for just 98 yards. Though his completion percentage is high, the team is clearly not letting him air it out very often, and the offense is geared heavily toward the run with 51 carries to just 17 pass attempts in last weeks overtime game.

James Madison played stingy defense against Richmond, giving up just 118 total yards, but they allowed Maine to rack up 385 yards against them, mostly in the air. FCS opponents are averaging just 15.8 points per game against the Dukes, who have averaged 21 points per contest.

JMU is most susceptible to the pass and Villanova will need to trust a freshman quarterback to move the chains through the air in hopes of getting a few shots at the endzone. The Cats will similarly need to stop Anderson from running all over their defense like he has done to most other opponents this year. If the JMU running game can be stopped, it will force Jace Edwards to make plays in the air, which he has not proven he is capable of yet.

Villanova might just get distracted though, playing in the giant new FBS-style stadium that James Madison opened this season. It is one of the nicest on-campus facilities in FBS football and an major asset to their program.

JMU will be one of the toughest teams the Cats have faced so far (something I will likely repeat every week now). A win here or in any of the remaining games would be an upset of an opponent that is superior on paper. The Dukes are not as potent an offense as New Hampshire, though, which opens a window of opportunity for the Villanova defense to get on track and shine.

The game kick off at Bridgeforth Stadium in Harrisonburg, Virginia at 1:30 p.m. on Saturday, October 15, 2011.

Radio: 950-AM ESPN in the Philadelphia area or a live audio stream will be a href=http://www.villanova.com/allaccess/available from Nova Nation All-Access on Villanova.com/a.

Television: There will be no television coverage of this game. Video available througha href=http://www.jmusports.com/LiveEvents.dbml?DB_OEM_ID=14400 MadiZone/a (subscription required).