Share All sharing options for: Marinatto Speaks on Temple 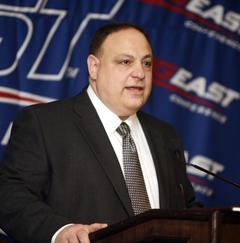 On Wednesday, Jay Wright came to Vince Nicastro's defense, and denied that Villanova used Big East conference calls to insult Temple University. Rick Pitino told assembled media in New York that nobody was blocking the Owls from being invited to join the conference. Neither of those facts deterred Temple fans who feel wronged that their programs are no longer being reported as part of the Big East discussions.

Temple fans have squarely targeted Villanova as the enemy, after a report that the 'Cats were blocking Temple. The block itself has never been confirmed or denied, but the more troubling report was the way the New Jersey paper described Villanova going about it. According to the New York Post, Villanova's discussion, "deteriorated into 'Nova bashing Temple rather than making a strong case for the league to consider the Wildcats' potential in football.

According to Jay Wright, that just isn't true, and now that has been backed up by John Marinatto.

Marinatto, who was disappointed that anyone would leak anything from confidential conference calls, gave a statement to Mike Kern of the Philadelphia Daily News. In part, he said, "at no time during any of this did anyone representing Villanova disparage Temple in any way."