Football gets butterflies on homecoming

Share All sharing options for: Football gets butterflies on homecoming 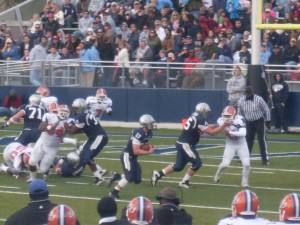 Old Dominion didn't play a snap of football from 1946 until 2009, but when the Monarchs returned to the gridiron, they did it in style, with a 19,818-seat stadium, and a winning record in each of their first two seasons. They are winning in 2011 as well, going 5-2 so far, but only .500 in conference play. Surely, a win over one of the CAA's winless teams this season would seem like a must for head coach Bobby Wilder's building program.

For the Wildcats, however, a win over the upstart program would be their first of the season in conference and a needed boost leading up to a tough final three games of the season. For 1-6 Villanova, playoffs are out of the picture, this isn't about getting hardware, it's about saving face.

It doesn't help having a team that is so banged up, though.

Some positions are beginning to look like a revolving door. At tailback, Austin Medley started the season high on the depth chart before being sidelined with a back injury. He's back, but freshman Kevin Monangai (who leads the team in rushing attempts) is now sidelined with illness. Similarly, at cornerback, sophomore Craig James had been sidelined with an injury after being named starter to open the season, he's back this week, but senior captain James Pitts is expected to sit out.

At least one player is returning from injury this week without another player being lost at the same time. Joe Price, who suffered a broken rib, concussion, sprained ankle and collapsed lung in week two against Towson (and continued playing with the injury) will return this week. He is listed as the number-two receiver at both outside receiver spots and will likely see action in the red zone as a tall target with good hands.

Last week, in his return from injury and his third career start, Dustin Thomas threw for 127 yards, 1 touchdown and two interceptions, completing 11 of 24 (45.8%) attempts. He added another 19 yards on the ground.

The Villanova offense has averaged about two scores per game, but hasn't been able to control the pace of the game, forcing the Villanova defense to spend a lot of time of the field. That has exposed a very young defense, which has had a tendency to give up as many big plays as it makes.

The young players are the ones to watch. They are the players that have the most growing to do this season and over the offseason. Players like Jamal Abdur-Rahman, who has been so strong early on that the coaching staff has been forced to find new ways to get him the ball — using him as the starting slot receiver as well as at tailback, for example. The best young player on the team, however, might be Dillon Lucas, the outside linebacker who has a tendency to get involved in every play and has lead the defense in tackles all season. At the end of the season, Lucas could even be named the best freshman player in the nation by the Sports Network.

The Monarchs, meanwhile, have done so well in their first full FCS season that they have earned themselves a spot in the national rankings. They are ranked #21 in the TSN poll and #22 in the coaches poll, a tremendous accomplishment for a program in its third season of existence. They have beaten Rhode Island and UMass, both ranked opponents at the time, but lost to Delaware in week-four and to a surprisingly-strong Towson team last week. 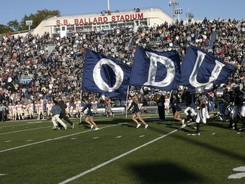 ODU's trendy spread offense is lead by quarterback Taylor Heinicke, who took over in early October when an injury sidelined former starter Thomas DeMarco. Heinicke performed well, throwing for 119 yards and 2 scores in the second half of that game. Last week, he passed for 360 yards, which is second in ODU history to DeMarco's record of 407 against Monmouth. DeMarco, who is recovering from a high-ankle sprain, has compiled 1,034 yards and 7 touchdowns passing in 7 games. Combined, both Dustin Thomas and Christian Culicerto's passing stats wouldn't measure up to that.

Their top target has been the vertically-challenged Nick Mayers, who has caught 28 balls for 395 yards and 4 scores in 6 games. Reid Evans is also dangerous, grabbing 28 passes over 7 games, for a net for 320 yards and 8 touchdowns.

The Monarchs also have two runningbacks who are averaging about 5 yards per carry in Colby Goodwin and Angus Harper. Harper has compiled 333 yards and four touchdowns on the ground, while Goodwin has contributed 356 yards and two more scores.

Without a doubt, Old Dominion can score. Their offense is the FCS's 5th-best scoring offense, putting up an average of 36.7 points in each contest.

Defensively, the Monarchs have benefited greatly from the play of linebacker Craig Wilkins, who has recorded 70 tackles as an outside linebacker in ODU's 4-3 scheme. Defensive tackle Ronnie Cameron is 15th in the nation in tackles-for-loss and the defense as a whole ranks 11th in that category. They are also 5th nationally for sacks, averaging 3.57 per game.

The Monarchs tend to give up more yards through the air than on the ground, perhaps due to a banged-up secondary. T.J. Cowart and Eriq Lewis were both opening day starters in the defensive backfield, and both have fallen prey to the injury bug. Lewis, like Villanova's Dillon Lucas, was named to the Jerry Rice award watch list earlier this season. Now, Markell Wilkins and Aaron Evans are listed as the starting cornerbacks, and both have starting experience, but this is a team that is now particularly thin at DB.

They have held their opponents to 27.9 points per game, which is better than the 30.7 points that the Villanova defense has coughed up weekly. Villanova has averaged only 14 points per game offensively.

The last few games of this season are about making progress and developing young players like Dustin Thomas more than they are about winning now. Regardless, if the Wildcats are going to win this game, they will need the redshirt freshman quarterback to ignite the offense to do better. 14 points per game is not enough firepower to beat CAA powers.

Villanova should ask Thomas to throw the ball early and test ODU's secondary, particularly on the outside of the field. A little success early in the passing game will give the 'Cats some breathing room. Moving the chains will allow the offense to eat up more clock and keep the defense from having to play significant stretches of the game. Villanova's defense is always better when the offense can be effective.

Though ODU is only in it's 3rd year of football, they are still a team with some experience. Possibly more than Villanova, on average. Nobody expected Villanova to be hoping for an upset win over a brand-new football program on homecoming prior to the season -- but that is why they ultimately play the games.

Villanova was devastated by graduation and injuries, but it does get better. Next season Villanova will get back Chidozie Ekweozor at offensive tackle and Norman White at wide receiver. The 'Cats will have sophomores starting where they once had freshmen, they will have an offensive line that has size, strength and experience and a defense that will have a year to grow as well.

The 'Cats need to get "better."

Radio: 950-AM ESPN in the Philadelphia area or a live audio stream will be a href=http://www.villanova.com/allaccess/available from Nova Nation All-Access on Villanova.com/a.

Television: There will be no television coverage of this game.