Share All sharing options for: Monarch's Reign Supreme at Villanova 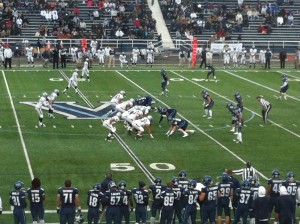 It took Old Dominion five minutes and two possessions to score their first touchdown. A Dustin Thomas fumble allowed the Monarchs to capitalize with a quick 42-yard pass to open the scoring, and further Villanova errors would allow them to take a 30-14 lead into the half. Old Dominion would carry that momentum into the second half, finishing the game ahead 37 to 14.

"We have continued a pattern which is similar to what we have been doing; turning the ball over offensively and giving up big plays on defense," Villanova head coach Andy Talley noted. "To our defense's credit, we did turn it around in the second half and play better in the second half. Turnovers lead to 21 points, and you just can't give someone 21 points just like that."

The stands began to clear in the third quarter.

The Monarchs tried for a two-point conversion after their opening score, but they failed to get their runner into the endzone. They then tried for an onside kick, which flew out of bounds at their own 40 yard line.

"I was hoping we'd get that [conversion], I'd be feeling pretty smart if we did. They did a good job, their D-line, one of them just destroyed one of our kids," Monarch's head coach Bobby Wilder said. "Villanova did a nice job, one of their interior D-linemen did a great job on that.

"We were 0-for-2 early on in this game on special teams. . . We've tried that [onside kick] six times and we've caught it four times. The two we missed, it has been out of bounds."

Wilder's team now has a winning record on the road. A lot of it has to do with ODU's freshman quarterback, Taylor Heinicke, who coming into today was the second-most efficient quarterback in the CAA. He since taking over for Thomas DeMarco he has played 14 quarters of football with only one turnover on a hail mary pass at the end of their game against Towson. He was 23-for-32 today for 204 yards and two touchdowns.

Heinicke was able to spread the ball around in the passing game, hitting four different receivers four or more times. Including Nick Mayers, who had 6 catches for 51 yards and Antonio Vaughn, who grabbed nine balls for 75 yards and the 42 yard touchdown that opened the scoring.

Heinicke also punted one ball, for 34 yards, landing inside the Villanova 20. It was only fair, seeing that the punter, Jonathan Plisco, also picked up 18 rushing yards.

"These wins are really big for us, especially winning on the road," Wilder said. "When I was talking to our players in the preseason about this conference, I told them about last year William & Mary being co-champs in the league and being 4-0 at home and 2-2 on the road, and the point I was making to them was if you can find a way to go .500 on the road in this league and win the majority of your home games, you're going to be around in November."

Villanova's offense moved the ball well on it's two scoring drives, but struggled to get anything done for much of the contest. An injury to starting left tackle Ross Hall certainly didn't help, forcing a smaller true freshman onto the field.

Hall would later come back into the game, but the Wildcats would not.

The 'Cat's didn't fare much better after the half. Thomas was sacked a third time on the opening drive and after forcing ODU to punt the ball, Thomas threw a pick right at the chest of the Monarch's star linebacker Craig Wilkins at the Nova 16 yard line. It took ODU four tries, but they eventually were able to punch the ball in to the endzone to make it a 23 point game.

After that pick, Thomas' day was over and the true freshman Chris Polony was given the opportunity to play the rest of the way. The Wildcats have been in search of consistency at Quarterback this season. Polony's first drive was mostly a good one for him, but an Austin Medley fumble ended the drive early. He went 3-of-8 for 21 yards in the air and added 26 more yards on the ground, which wasn't really enough to bring the 'Cats back.

Joe Price is a sophomore toughman at wide receiver who has good hands and good height. He was returning to the game after being hospitalized after the week-two game against Towson where he played with broken ribs, a collapsed lung and a sprained ankle. Price was one of only two Wildcats to score a touchdown, leading the team in receiving with 34 yards — a tie with Jamal Abdur-Rahman.

Defensively, Villanova was again lead by true freshman linebacker Dillon Lucas, who had 12 tackles, one sack and one tackle for loss. Marlon Johnson also got through to sack the ODU quarterback. Big plays were their kryptonite, however, and ODU had enough of them to rack up 381 yards of offense against the 'Cats.

"Dillon has had a phenomenal freshman year, he's fast, quick, tough, smart," Talley glowed. "I think about 205 pounds, he needs about 25 more pounds to really be steady in this league, he's playing undersized, but playing very well."

Villanova has used three quarterbacks this season, but expect that the last three weeks will come down to either Chris Polony or Dustin Thomas.

"Unfortunately Dustin Thomas had a rough go and I don't think he was doing himself any good by staying in the game," Talley said of his starter. "We went to Chris Polony, who is a true freshman, and I think he did a really nice job in there, much better than he did five weeks ago when we gave him a start.

"So we're back to square-one at quarterback."

Talley described a muddled picture at quarterback that was arising after this loss. The 'Cats have used three quarterbacks this season (and John Robertson who took a snap out of the wildcat package in week one and was injured), and haven't found a consistent answer. The three freshman quarterbacks will compete for the job again in spring practice and in August, but in the mean time, there is no obvious answer.

"I think after a game like that, you want to go back to the drawing board, take a look and see what happened," Talley explained. "He's struggling for sure, you know he was off for four weeks. He had some big issues with reads today. There were some big plays out there for him to hit if he read it, and he missed those.

"The physical part is one thing, but when you're not grasping what we're teaching, that's a concern. Chris did a good job with that."

Villanova's use of multiple quarterbacks this season hasn't helped the offense. Often the snaps from center are low, and receivers have to adjust to different throwing styles.

"There's no rhythm, there is no chance for that guy to be the leader."

The 'Cats aren't without talent, they are sorely lacking in experience, however. Nine freshmen started for Villanova today, and seven of those were true freshman. Even more freshmen played even if they didn't start.