Not So Fast, WVU

Share All sharing options for: Not So Fast, WVU 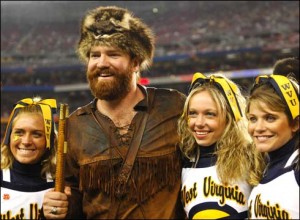 Various reports are out this morning claiming that the Big XII has hit the brakes on a WVU move to their conference. Some reports have suggested that Louisville is making a late push to join instead of WVU, including some influence from Senator Mitch McConnell of Kentucky, a Louisville supporter who knows Oklahoma president David Boren well from their shared time in the United States Senate.

Matt Jones of KentuckySportsRadio.com reports that West Virginia has been asked for more information while the Big XII does its due dilligence.

The New York Times' sources suggest that West Virginia's chances are about 50-50 of getting the invite to the Big XII that they thought was wrapped up yesterday afternoon. While Louisville and West Virginia jockey for position with the Big XII, CBS Sports.com reports that the decision between the two Big East schools could come as soon as Monday. Even that may be delayed unless a consensus can be reached in relatively short order.

Meanwhile, the Big East has the mammoth task of trying to convince new football-playing members to join up in the midst of this drama. While some Catholic schools are reportedly reaching their boiling point and want to discuss a breakaway to form a non-football conference, the major lynchpin programs of such a conference, Georgetown, Villanova and St. John's, view themselves as national brands and prefer to try and rebuild the Big East as a major conference. Notre Dame, however, would not join a conference without football, and has begun internally considering its options. The Big Ten and ACC would both likely add Notre Dame if the Irish were willing to bring their football program along with the rest of their sports, while the Big XII would be interested in Notre Dame with or without their football team (but would ask for a significant football scheduling agreement and would require ).

If joining the Big XII, Notre Dame would be independent in football and have a major-conference home for 15 of their 21 other programs, but would need to find new homes for men's soccer as well as men's and women's lacrosse. The Irish also compete in fencing and ice hockey, which would not be affected by a move).

For the Irish, convincing the their wealthy football donors that joining a conference is in the programs best interests is a tall task. Alumni and boosters of that school value independence, their NBC contract and their scheduling freedom greatly and would need to be talked into supporting any move to a football conference. The Irish have a lucrative television deal with NBC for football that lasts through the 2015 season and talks were underway regarding an extension of that contract. The Irish were very close to joining the Big Ten five years ago, when the rebuilding of the Big East along with pressure from boosters caused them to back off at the last moment.

If the Irish were to move to a football conference, at least one more school would go with them to even out divisions.

The Irish are probably willing to stick around in the Big East if the conference can achieve some level of stability and rebuild both in football and in other sports, like lacrosse, soccer and baseball, where the conference does not have a high level of participation at the moment.

The Big East does believe that the BCS point system works out in their favor for maintaining an AQ if the conference is able to add Boise State, Houston and UCF along with their other candidates -- even if they also lose West Virginia. Even so, losing Louisville would be less damaging to the football side of the conference because of their relative success over the past few years. Cincinnati also brings some BCS clout after finishing the 2009 season in the top-5 of the BCS standings.

Even so, the loss of another team would require an additional new member to be added to the Big East's plan to get to 12 football-playing members. Reports are that there is a lobby in favor of making Memphis that team, to add some basketball credibility back into a conference that could be losing three schools that perennially finish in the top-half of the league. Temple's name has also re-emerged, but Villanova's objections won't likely be dropped unless it is clear that the Owls are necessary for the survival of the conference -- which does not seem to be the opinion of the football schools.

Rick Pitino has lobbied publicly for both Temple and Memphis while his university has been lobbying the Big XII behind the scenes.

Don't count out BYU joining up as a football-only member either. Their demands would potentially be less offensive to Big East members and they provide a convenient travel-partner for Boise State and Air Force in a Big East "west" division.

More immediately, the University of Houston regents will meet tomorrow to authorize their president and chancellor to take action regarding conference alignment, which could be the first step toward that school joining the Big East. Additionally, the Big East presidents and administrators will have their annual meeting in Philadelphia on Tuesday, where additional actions could be taken -- including (finally) issuing official invitations to certain institutions.

Though, invitations are normally not issued until it is clear that the invited institution is likely to accept.

UPDATE (6:35pm): Boise State is reportedly ready to join the Big East, but is waiting for Air Force to commit to making the move first. Air Force's addition would do two things for Boise; (1) cause the increaded $10 million exit fee to kick in for football members and (2) provide the Broncos with a convenient travel partner. In the second case, BYU would also suit that purpose if they could be convinced to join. Air Force, for what it is worth, is still interested, but somewhat cautious given the lack of league stability.

UPDATE (Midnight): There are some reports trickling out that one compromise possibility is for the Big XII to take both Louisville and West Virginia. If that happens, the Big East would be down to four schools in football.