Share All sharing options for: The Wisdom of Crowds Experiment: Mouphtaou Yarou 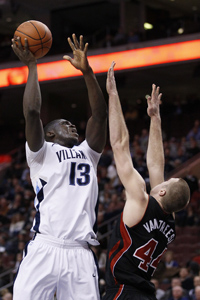 In this year’s The Wisdom of Crowds series, our assignment is to figure out how Coach Wright will replace 56% of last season’s offense produced by departed players Corey Stokes, Corey Fisher and Antonio Pena. In today’s post we focus on 6-10 255 pound forward/center Mouph Yarou. Use the voting buttons, below, to predict the points per game you think Mouph will score this year and the comment section to explain your thinking. To help you come up with your prediction, we have provided below his stats as a Wildcat, including the Euro Jam tournament in August, a "third party expert" player assessment, and highlight video.

"Now entering his junior season, it is time for Yarou to turn "potential" into consistent production. With Pena gone, Yarou should be able to produce a near double-double every time out.

Strengths: Good rebounder with a nose for the ball. Toughness. A decent shooter out to 12 feet. Runs the floor well for a big man. Persistent. Good court awareness. Decent passer.

Weaknesses: Tentativeness on offense. Poor defender in transition and guarding screens. Hands at times appear questionable. Not a great leaper from a stand-still position - gets up much better in transition off a dead run or blocking shots as a help defender when he gets a few steps head-start towards the opponent. Needs to develop some two-dribble power moves to become more effective scoring in the low post.

Summer School: Get healthy - recovering from a broken bone in the wrist that happened during the Big East Tournament game against USF. Needs to get into the best playing shape of his career, learn the defense better and through drills and repetition become a much more efficient offensive player - turning low post touches into quick points or quick passes.

What next: Yarou should emerge as one of the best bigs in the Big East this season"