A Snowy Loss on the Maine Line

Share All sharing options for: A Snowy Loss on the Maine Line 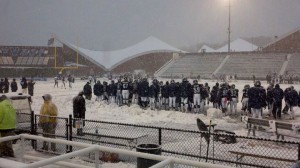 In a Murphy's Season, where everything that could go wrong did, it was only fitting that the final game at Villanova Stadium would be covered in snow. The Wildcats planned to honor their seniors before the unusually-frozen October contest that brought the league's top team, the Maine Black Bears to the Main Line. The 'Cats couldn't overcome the Black Bears or the elements, losing the game 41 to 25.

"Maine is probably going to be champion of the league," Villanova coach Andy Talley claimed. "We're just trying to reach the competitive level with a group of young players.

"I felt we could be competitive with Maine, I thought we did a good job running the ball, I thought our freshman quarterback Chris Polony played real well."

Maine scored first on a 33 yard pass to Maurice McDonald in the first quarter. Villanova didn't answer until the second quarter on an Austin Medley run from 5 yards out.

Maine would score three more times before Villanova would get on the board again. Not for lack of opportunities, however. Villanova was consistently driving downfield deep into Maine territory, but failed to score on many of those opportunities, including two missed field goal attempts. Prior to today, Mark Hamilton hadn't missed a field goal this season.

Hamilton also missed an extra point on the first Villanova touchdown in the second quarter when it was blocked by Maine. Down big, the 'Cats didn't bother to try another kick after their second touchdown, instead going for the 2-point conversion, which failed.

"The center snap, he was having trouble with the ball," Talley explained of his team's sudden inability to kick. "The ball was wet, officials tried to do a good job with that. Its bad out there, those are the worst conditions I've played in in my career and that's 44 years of football. I think that was part of it. The holder as well. Its hard to get your footing.

"It was slippery out there, I think the kicking game was really affected by the weather out there."

Maine, meanwhile, tried two conversions, their first one failed, but the second one was successful. 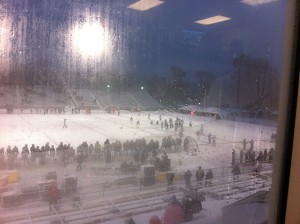 Villanova was in the Maine red-zone six times, but only converted one trip for a score until tacking on two more red-zone scores in the final quarter. The 'Cats moved the ball well for most of the game, going into the half leading Maine with 177 offensive yards to the Black Bears' 159. Even at the end of the game, 'Nova had 19 first downs to Maine's 18.

Some of that has to do with Villanova giving Maine great field position to start two scoring drives. One score came in the second quarter after a Villanova kickoff sailed out of bounds at midfield. Another after a failed onside kick, where the kicker's foot failed to do much more than graze the ball.

In the fourth quarter, the 'Cats scored two more touchdowns, but it was too little too late. Maine entered that quarter up by 16 points and tacked on 13 more before it was over.

"It was tough," Maine safety Trevor Coston said of trying to defend in the elements. "They had some big runs, but it was hard with the footings, so we had to break a lot earlier."

One of those big runs was a 33-yard dash by Villanova's Austin Medley, who finished the game with 102 yards and a touchdown. It was one of the best individual rushing games of the season for a Villanova tailback.

Chris Polony had a great game, given the elements. The freshman passed for 198 yards, completing about half of his passes and connecting on three touchdowns with just one interception. Senior slot receiver Mikey Reynolds grabbed two of those touchdowns for the first career game with two scores as a receiver. Dorian Wells had the other, along with 73 yards through the air, 60 of them on the touchdown reception that opened up when a Maine cornerback slipped in the snow and fell down.

"The difference between the Maine quarterback and our young guy is that he's been around, he has experience, and I can remember when he was struggling."

Defensively, the 'Cats couldn't stop the big plays. Often missing a tackle or blowing coverage deep to give Maine a score. Maine had three scoring plays of 33 yards or more, including an 80 yards passing touchdown from Warren Smith to Arthur Williams. The Cats' forced and recovered two Maine fumbles, and were able to capitalize on the second one with a short TD catch by Mikey Reynolds in the 4th quarter.

"We had to sell a play-action, we rolled out and I saw Artie over the middle," Smith said about his long toss of the night.

That second fumble was recovered by defensive tackle Antoine Lewis. It was his second career fumble recovery at Villanova and his first this season. Super-freshman Dillon Lucas didn't lead the 'Cats in tackles in this contest, but recorded a few in the fourth quarter to lift him to third-place with five. Safety Eric Loper and freshman corner Jerry Miles lead in that category.

The defense still struggles with coverage breaking down, according to the coach. The young secondary hasn't fully adjusted to the college game. Talley also hasn't been impressed with tackling this season, which he referred to as "shoddy."

"It was a little bit of some of the same stuff we've done on the defensive side, we gave up some big plays. We're still trying to put our finger in the dyke on that.

"At times we're not always the physical defense that we've been because we're still growing guys at the linebacker spot, so the pressure falls on Devon [Bridges], a guy that's been around a little bit. We're probably not as physical as we've been on defense."

Maine holds on to it's perfect conference record going into a meeting with the league's other unbeaten, Towson. The Black Bears were a 4-win team last year, but turned it around and Talley sees a lot of his own program in that turn around.

"I think we gave [Maine] the blueprint. We won the national championship two years ago, and then we were a final four team last year and four years before that we were 4 and 7. I've been there, done that, don't want to do it again. We cycle up. I told the guys last week, we're not a football factory, I'm not going out getting transfers and J.C. players, we're going out and doing it with freshmen, sophomores, you know, that's the way we do it."

Next week the 'Cats will take on the Massachusetts Minutemen in a game that won't count in the CAA standings because of UMass' status as a program transitioning to the Bowl Subdivision. They likely won't have senior captain James Pitts, who started today, but could not complete the game with his knee injury, nor will they have freshman running back Kevin Monangai, who missed the last two games with a case of mono.

What they will have, is a group that battled through the snow to keep a game close against the top team in the conference in the first half, and never quit, finding the endzone twice in the final seven minutes.