No time to hibernate on the Bears

Share All sharing options for: No time to hibernate on the Bears 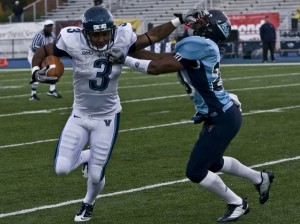 Before the season started, Maine was picked to finish 9th in the CAA — two spots below Villanova. Eight weeks into the season, Maine sits atop the conference standings at 4-0, while Villanova sits at the bottom with Richmond, looking for their first conference win. When the 6-1 Black Bears come to campus this weekend, they will seek to take advantage of a team that has made all of the mistakes you would expect of a team that starts 11 freshmen and no seniors.

The 12th-ranked Maine will be looking for revenge after Villanova went up to Orono last season and decimated their team, 48-18, and the way things have been going for the 'Cats, they may be likely to get it.

Villanova's problems stem from a combination of injuries and graduations, leaving the 'Cats with a dearth of leadership and experience on the field. Offensively, the quarterbacks have struggled to be effective and Andy Talley has gone back to the drawing board at that position after initially believing that Dustin Thomas was a potential four-year starter. Now, Thomas will have to compete with Chris Polony and fellow freshman John Robertson in spring practice.

After harshly criticizing Thomas' play after the homecoming loss to Old Dominion — noting that he blew a number of reads that left big plays on the field — head coach Andy Talley will turn to Polony to start this week. The true freshman has lead a few impressive drives in his limited action so far. This will be his second start of the season; he was pulled from the field in the second quarter in his previous start against Monmouth in week 3. He has completed 58% of his passes since then.

The offensive line hasn't helped things either. A young, undersized and inexperienced unit, the linemen have notably missed out on getting much push from the line of scrimmage this season, which has affected the running game and the quarterbacks' effectiveness. Next season, Chidozie Ekweozor should return to the team and take over at one of the tackle spots, which should help, but in the mean time the unit is struggling.

The bright spot on offense, perhaps, has been freshman Jamal Abdur-Rahman, who was recruited as a running back, but has lately been starting games as a slot receiver. He is currently 7th in the CAA in all-purpose yards with 887. He has had good success catching passes as a receiver, and has had good success running the ball in limited touches.

Kicker-slash-punter, Mark Hamilton, is probably the 'Cats most potent offensive weapon, however. Since taking over for Nick Yako (who also lost the job late last season), Hamilton has been a perfect 9-for-9 on field goal attempts.

Villanova has other talented offensive players. Austin Medley has plenty of potential as a CAA running back, for example, and wide receivers Dorian Wells and Joe Price have been very effective making plays in the receiving game. For all of those skill position players, however, it is tough to produce any kind of statistics if the offensive line and quarterback are not performing well.

Price has now passed junior Kenny Miles on the wide receiver depth chart and will start this week.

Things haven't been much better on defense. While the 3-3-5 defense is designed to take some calculated risks and might be expected to give up some big plays, the volume of big plays given up has been much greater than usual this season. The inexperienced linebackers and defensive backs are still learning how to play at this level and have little veteran presence to help cover for their mistakes.

Nonetheless, Dillon Lucas has emerged as a star for the 'Cats in his first year on the Main Line. The young outside linebacker has consistently played well, leading the team in tackles with 71 through 8 games and recording two sacks. This despite being considered underweight for his position.

Jerry Miles (CB) joined Lucas, Joey Harmon (MLB) and Joe Sarnese (FS) as true freshmen starters on defense last week, after an injury sidelined James Pitts -- the lone senior on the unit. Miles is expected to start again this week, opposite sophomore Craig James, and should continue to see action the rest of the way.

For Maine, quarterback is not a position they worry about. Warren Smith has completed 65.1% of his pass attempts this season for 1,752 yards, 12 TDs and 4 interceptions. He does that while spreading the ball around. His favorite target has been Maurice McDonald with 45 catches for 446 yards and 4 touchdowns, but his second option, tight end Justin Perillo, has grabbed 33 balls for 342 yards and 3 scores. Derek Session has also grabbed 23 balls for 270 yards and two scores.

When Maine isn't slinging the ball all over the field, they let tailback Rushaun Brown go to work. Their feature back has more than 100 more carries than his back-up at this point in the season. Brown has 648 yards on the ground and 6 touchdowns, averaging just above 90 yards per game.

Defensively, Maine has a few stars as well. Defensive endMichael Cole has six sacks in 8 weeks, while safety Trevor Coston has four interceptions. The Black Bears' leading tackler is linebacker Jerr McMillian with 52.

On both sides of the ball, Maine has made big plays in big spots this season. A factor that allowed them to grind out some big victories like last weeks' 23-point fourth-quarter comeback at Richmond. When orchestrating those types of victories, it helps to have 17 fifth-year seniors on your roster.

Maine is the opposite of Villanova in almost every conceivable way this season. From place in the standings to ability to execute to the experience-level of their players, Maine has been better-off than the Wildcats this season. While Maine has something of a map to success to follow, the Wildcats are still packing their gear.

You cannot beat this Maine team by getting out to an early lead and then coasting the rest of the way. They are relentless in searching for a way to win. In order to get a win in their last game at Villanova stadium for the season, the Wildcats will have to find some consistency on both sides of the ball.

Will Chris Polony be the answer? Andy Talley seems to think he is better prepared to take on CAA opponents at this point in the season, which may or may not say much at all. He has looked good and been awful this season, but things would be better if he were able to succeed. What Nova won't do is go back to Christian Culicerto at quarterback. Culicerto is a walk-on senior who is more of a game manager than a game changer and with no shot at the post-season, there is little point in giving these precious few live repetitions to a player who will not be able to help the program next year.

Even with five defensive backs, the Wildcats still need to do a better job of covering opposing receivers. Players like Dillon Lucas could conceivably help with that situation by getting consistent pressure on the opposing quarterback, forcing incompletions and bad throws.

Villanova will continue to search for answers this week and will continue that search next week in Massachussets before returning to Philadelphia to close the season against a Delaware team that is also suffering (though not as badly) from player departures. The Wildcats will have November 19th circled on their calendars as their deadline to figure it all out.

Television: There will be no television coverage of this game.