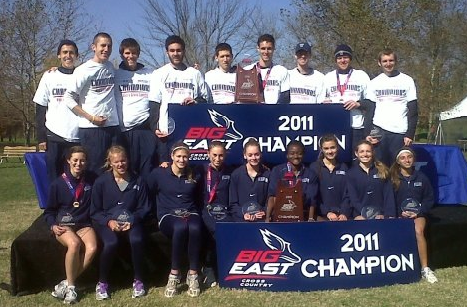 Men's team rises to the top

In what may be the last season of the Big East as we've come to know it, Villanova has started quickly to take both of the first two pieces of conference hardware that have been put up for grabs. Both the men's and women's cross country teams went to Louisville, KY and beat the Big East field.

The men's team had 3 runners that finished in the top-10, two more top-10 finishes than any other school. Matthew Gibney, a senior, was the first Wildcat to cross the finish-line in 5th place overall, while fellow senior Keith Capecci finished right behind him one second later. They didn't have to wait long to be joined by Ryan Sheridan, who finished 8th overall, while freshman Samuel McEntee finished 11th.

The top five 'Cats finished within 15.9 seconds of each other, and the 6th man crossed the finish line before any of the top-5 schools had their second man in.

The men's cross country team was ranked 16th nationally going into the meet. They dominated the Big East field, however, ending with a 51-point lead over the second-place Georgetown Hoyas.

For the women, Sheila Reid continued to prove that she is the top woman runner in college. Reid took home her third straight Big East individual cross country title while helping her team to it's 4th straight Big East title. They finished ahead of nationally-ranked Providence (ranked 7th), Georgetown (6th) and Syracuse (8th) teams.

Reid was followed 11 seconds later by fellow senior, Bogdana Mimic, who took second place at the meet. Mimic passed the top runners from West Virginia and Providence over the last 100 meters of the race. Reid didn't have to pass anyone, however, leading the field by a large margin over the final 1,000 meters.

Villanova's 5th runner, Caroline Hogan, finished ahead of the #5 runners from Providence, Georgetown and Syracuse to lock down the victory.

"It took a complete team effort for us to win today and that is exactly what happened," coach Gina Procaccio said. "Everyone had to set up for us and I am so proud of our runners for getting their job done. It was a great team effort and that is what makes this championship so fulfilling for us."

They entered the meet ranked 4th in the nation and first in the Mid-Atlantic region. Their win yesterday will give them a boost going into the NCAA Mid-Atlantic Regional on November 12.

For additional coverage and post-game interview videos, check out the Villanova Running blog.