D-League: Reynolds out; Sumpter to Tulsa

Share All sharing options for: D-League: Reynolds out; Sumpter to Tulsa 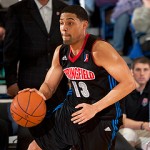 Scottie Reynolds had to decide whether to return to the NBA D-League's Springfield Armor for a second season or to seek out other opportunities. According to reports, he had until Monday to make up his mind -- and ultimately he decided against it.

Reynolds played briefly in the Philippines after the D-League season ended and had mixed results. The relationship with his Talk N Text coach ended sourly, with the coach exclaiming that he "sucks" during the PBA finals and cutting him from the team in favor of Maurice Baker, the American player he was brought in to replace.

Reynolds' next move is unknown right now, but the European season is already underway and the D-League is the highest level of professional basketball in the United States during the NBA's lockout.

The Springfield Armor had traded their first round pick in this season's D-League draft to the Tulsa 66ers get Reynolds last year. This season, Tulsa used that pick to draft another Villanovan — Curtis Sumpter.

Sumpter was picked 11th overall in the first round by Tulsa, an affiliate of the Oklahoma City Thunder. The 66ers are coached by Nate Tibbetts, who along with his staff, served as the coach of the USA Basketball Pan American Games team this fall.

Sumpter clearly left an impression with the 66ers staff, since they used their highest of two first round picks to select him. Sumpter played sparingly with the national team in Mexico, but had been nursing an ankle injury since the team had been in camp. He scored 8 points in 4 games.

That team lost to Mexico in the semifinals, but ultimately defeated the Dominican Republic to win the Bronze medal.