A Minute on UMass

Share All sharing options for: A Minute on UMass 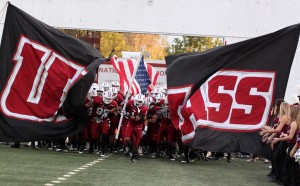 No matter the outcome of Saturday's game, the UMass Minutemen's record in the CAA will stand at 0-0; Massachusetts is in their final season in the conference and the first of their transition to the Bowl Subdivision. While they may not be eligible to win the CAA or play in the postseason, the Minutemen are undeterred.

Saturday's contest will be homecoming for Massachusetts.

Though they carry no official CAA record, UMass has won 3-of-6 contests in the conference schedule so far. They are coming off of a big conference win over the other winless CAA team, defeating Richmond, 28-7 last weekend.

UMass is lead offensively by senior tailback Jonathan Hernandez, the top runner in the CAA, who rushed for 103 yards and 3 touchdowns last weekend. He has rushed for 885 yards and 11 scores so far this season, averaging 107 yards per game.

Redshirt freshman quarterback Kellen Pagel, who threw for 192 yards and a touchdown last week, has passed for 1,489 yards and 8 touchdowns so far this season. He has completed 57.6 percent of his passes. On the receiving end of 37 of those throws has been Julian Talley (no relation to the Villanova coach), who has amassed 440 yards receiving and 3 touchdowns this season.

Pagel is questionable for this weekend after suffering an injury from a violent "upper body hit" last week. The injury appeared to come on a late hit, but no penalty was called on the play. If he cannot play, another redshirt freshman, Brandon Hill, will start. Hill has played sparingly since Pagel won the job, but did start against Central Connecticut when Pagel was recovering from a concussion. In that game, Hill threw for 169 yards and a touchdown.

Defensively, UMass linebackers Perry McIntyre and Tyler Holmes are among the best in the league. Last week McIntyre was the CAA Defensive Player of the Week, recording 11 tackles and 1 sack last week against Richmond. The Minutemen were able to get to the Richmond quarterback with ease, forcing 6 turnovers.

They will try to take advantage of Villanova's relative youth this weekend.

Andy Talley hopes that his offense has moved past it's early struggles however. Last weekend they scored 25 points for the first time this season, and accumulated over 400 yards of offense for the first time since last season's FCS quarterfinal game at Appalachian State.

The freshman Chris Polony earned another start this weekend after passing for 198 yards and three touchdowns last week, committing only one turnover. All of which were season (and career) highs for Polony. Even more impressive was that he did it in the snow.

Two of those touchdown passes were caught by Mikey Reynolds, who started the season at slot receiver, but later lost the job to freshman Jamal Abdur-Rahman. Reynolds was playing in his last game at Villanova Stadium. Dorian Wells caught the other Villanova touchdown reception and added 73 yards to his record as well.

Austin Medley, a redshirt freshman tailback, continued a string of strong performances for the Wildcats, carrying the ball 17 times to pick up over 100 yards and a touchdown. He was the first Villanova player to break into triple-digits in rushing yards this season and leads the team in rushing yards and touchdowns.

Medley is now the starting running back for the Wildcats and will be backed up by senior Lawrence Doss for the rest of the season while freshman Kevin Monangai remains sidelined by mono.

Defensively, the brightest star for the Wildcats has been freshman linebacker Dillon Lucas. Lucas leads the team in tackles with 76 and leads all freshman in FCS in that category as well.

There are 4 freshmen starting on defense, 3 sophomores and 4 juniors. With cornerback James Pitts' knee injury holding him out, possibly for the remainder of the season, the Wildcat defense will not feature any seniors. That lack of experience hasn't helped Villanova, which has experienced growing pains on that side of the ball. Blown coverages in the secondary and questionable tackling have caused an otherwise athletic and talented defensive unit to give up too many big plays to opponents.

With the offense looking like it might be back on track last week, however, Villanova will look to resolve some defensive issues this week in the hope that they can put together four complete quarters against a middle-of-the-pack Delaware program in the season finale.

It may not make much difference whether the Minutemen start Pagel or Hill on Saturday. Both young quarterbacks are capable of performing well and leading their team to a victory. The Villanova defense, however, needs to execute on those fundamentals this week, in order to have a chance to slow down a UMass offense that has averaged over 30 points and over 400 yards per game.

The 'Cats will also need another strong performance from the young Chris Polony. He has really stepped up and made the most of his opportunity in the last few games. Having talented receivers has helped, as well, and the offensive unit as a whole looked much more capable last week in the snow than it had done all weekend.

The 'Cats also can't afford a repeat of last week's kicking woes. The kicking game was impossibly bad against Maine, but it was likely the snow that caused most of the problems, and Mark Hamilton can be expected to return to form this week.

If the 'Cats are hoping to upset a UMass team that they haven't beaten since 2001 (and have never defeated in Amherst), they will need a complete game. It will take 4 quarters from both the offense and the defense to pull ahead and hold on.

The game will kick off from McGuirk Stadium in Amherst, Massachusetts at 3:30 p.m. on Saturday, November 5, 2011.

Television: The Comcast Network will carry the game live.