Talley gets first win in Amherst!

Share All sharing options for: Talley gets first win in Amherst! 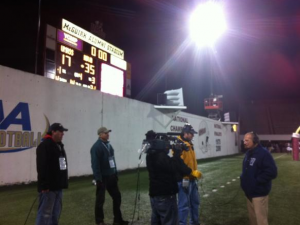 Andy Talley talks to the media after the upset win (Photo: Gina Talley)

Head coach Andy Talley had been winless in every prior game at Massachusetts' McGuirk Stadium, but on his last trip there for a CAA contest, the 'Cats took home a big win, defeating the Minutemen, 35 to 17. The Minutemen had 72 scholarship players to the Wildcats' 63, but that didn't matter today. Villanova was the homecoming football opponent, but the assembled alumni would not go home happy.

"This is the kind of day that we have been looking for all year," Talley said in a statement. "We have been trying to put together a strong effort from our offense, defense and special teams in one game and we had that today. We didn't turn the ball over except for once and we had a good defensive package which allowed us to take advantage of the other team's turnovers."

The 'Cats committed no turnovers through the first three quarters and had only one in the game — a fumble late in the fourth quarter after they had already built a big lead. The Minutemen committed 6 turnovers in the game.

James Pitts was responsible for half of those UMass turnovers, picking off Brandon Hill three times, which was one short of the school record of four interceptions in a game, set back in 1939. Craig James recovered two of the three UMass fumbles as well. Villanova converted most of those opportunities into scores, allowing them to build offense off of their defensive pressure.

It was a change for the Wildcats' whose defense had struggled to create turnovers all season. They also had a number of big stops to keep UMass from getting back into the game.

The offense had another strong showing, scoring the most points it has all season and compiling 350 yards of offense and five touchdowns. Freshman quarterback Chris Polony had a second straight 3 touchdown game for the 'Cats, completing 64.5% of his passes for 183 yards with no interceptions. Polony also had 26 rushing yards on the day, in a performance that likely placed him far ahead of the pack in the Wildcats' quarterback pecking order.

Austin Medley had two scores in the game, one week after recording the first 100-yard rushing game of the season for Nova. The scores came on a short pass from Polony and a 2-yard rushing play, both in the second quarter. Medley was later injured on a kickoff return and would stay out of the game.

The other two passing touchdowns were to Jamal Abdur-Rahman and Dorian Wells. Abdur-Rahman had 124 yards in the game, 62 of them coming on 8 carries and 62 more coming on 6 receptions. Wells had just two receptions for 22 yards, including his 13 yard touchdown catch.

Senior running back Lawrence Doss also scored for the 'Cats, running the ball in from 7 yards out in the third quarter to give the 'Cats am 18-point lead. That score would ice the game for the Wildcats.

The Minutemen actually outgained the Wildcats with 370 total yards. Freshman quarterback Brandon Hill, who was filling in for the injured Kellen Pagel, passed for 300 of those yards, but only connected on one touchdown.

That pass was caught by Julian Talley, who lived up to his star-billing by grabbing 11 balls for 155 yards. Talley was a handful for the Villanova secondary all afternoon.

UMass called Jonathan Hernandez' number 20 times in the game, and he finished with 99 yards. It probably could have been over 100, but Hernandez came out of the game with an injury in the third quarter.

The Wildcats have next weekend off and will be preparing for their season-ending game against rival Delaware. With the 'Cats finally seeming to have the quarterback situation under control, that game has a chance to be a very competitive match-up.

The November 19th regular season finale will be the first ever American football game held at PPL Park in Chester and the Wildcats were hoping that it would be a sell-out crowd.