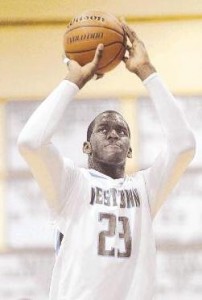 Villanova's 2012 recruiting class is beginning to firm up. After giving an early oral commitment to play for the Wildcats next year, Daniel Ochefu, a forward from Westtown, Pennsylvania, tweeted that his national letter of intent was "signed and sealed" early this afternoon. Ryan Arcidiacono, a point guard from Neshaminy, is also signed and delivered his letter of intent to the Main Line a few hours later.

Ochefu, at 6-10, is rated four-stars by most recruiting services, and has a very strong face-up game. Scouts believe that he can also bring value at the 5, but will need to continue to refine his back-to-the-basket moves.

"We are thrilled to welcome Daniel to Villanova," exclaimed head coach Jay Wright. "Daniel is a very well-rounded young man who is determined to excel in the classroom and on the basketball court. He has a knack for shot-blocking and rebounding that will be a great asset to our team and is a skilled offensive threat. His coach, Seth Berger, has prepared him well and our staff is looking forward to helping Daniel reach his potential."

He is joined in the 2012 class by Arcidiacono, also rated four-stars by recruiting services. The 6-3 point guard is skilled on the ball and has the ability to be a distributor, but also has a penchant for putting the ball through the hoop. Arcidiacono has also made a name for himself as a shooter and has good range, hitting a good percentage of shots from beyond the arc.

Both of Arcidiacono's parents were athletes at Villanova.

"To add Ryan to our basketball family is truly a great Villanova story," Wright stated. "This is a young man who has a unique appreciation for what our university offers. His parents, Joe and Patti, have stayed connected to their alma mater and it’s thrilling to bring in the next generation to our campus.

"On the floor, Ryan is a complete player who has been well schooled by his coach, Jerry Devine. His court sense, vision and uncanny shooting eye give him the opportunity to become the next great Villanova guard. Ryan is committed to becoming the best player he can be and our staff cannot wait to begin working with him when he enrolls at Villanova."

CBS Sports' Jeff Borzello also posted his projected landing spots for the top uncommitted 2012 recruits. Amile Jefferson, was third on his list and projected to choose N.C. State. Savon Goodman was ranked 12th and projected to reclassify to the 2013 class while he works through some academic issues.

Borzello notes that Jefferson is "wide open" but planning to make a decision during the early signing period, so hope isn't lost for Villanova, but the talented forward has not made an official visit to Villanova and has not been spotted on campus in recent days. Jay Wright would love to add the Philly kid to his roster next season, however.