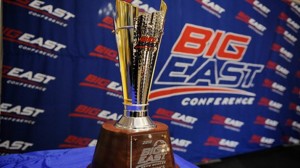 Villanova Soccer finished the season in 5th place in the "Red" division, grabbing the next-to-last spot from that division into the Big East soccer tournament. They then proceeded to knock off the 4th-seeded team in Notre Dame in South Bend before traveling to Tampa to defeat the top-seeded USF Bulls. It has been a truly impressive run for the Wildcats to get to the Big East semifinals at Red Bull Arena in Harrison, NJ.

The 'Cats will face the 21st-ranked St. John's Red Storm in a game on Friday that has major implications for Villanova -- a win puts them one game away from an NCAA tournament berth. St. John's has dominated the all-time series with Villanova, going 21-5-4 since the schools first met on the soccer pitch in 1984, and they have never lost to the Wildcats in Big East tournament play.

That streak of dominance did not help them during this season, however. In the teams' only meeting on October 19th, the Wildcats prevailed 3-1 under wet conditions on West Campus. Neither team will have home field advantage in this meeting, however.

Part of Villanova's success has been senior goalkeeper John Fogarty, whose goals against average is 0.90 and has posted an .832 save percentage. Fogarty has not allowed a goal in Big East tournament play so far, and made a key save in the 89th minute against South Florida -- a goal that would have tied the score -- securing the victory which became official moments later.

The Villanova defense has also been tight with Kyle McCarthy providing a difficult challenge for opposing players hoping to get a clean shot on goal. McCarthy began the year in a defensive midfield role, but was shifted to central defense when an injury sidelined his teammate, Chris Christian. McCarthy has performed impressively in that role, however, keeping both Notre Dame's Ryan Finley and USF' s Dom Dwyer in check.

Midfielder-slash-forward, Kyle Soroka, scored the 'Cats only goal against South Florida, his fifth of the season, at the two-minute mark. That goal tied him with forward Aaron Dennis for the team lead. Fellow forward, Dylan Renna has only scored 3 goals this season, but he has accounted for 12 points, and leads the team in assists (6).

The Red Storm offense is driven by Jack Bennett, who has assisted on the game-winning goal in each of their Big East tournament games. The midfielder has scored or assisted on eight game-winning goals this season (4g, 4a), and should be considered a major threat to do so again on Friday.

Their defense is anchored by Connor Lade, who has been named the Big East Defensive Player of the Week two times this season. Their defensive unit limited Syracuse to just four shots on goal in a 2-1 win earlier this season. Lade and the defense also managed to hold Louisville, a team that had been averaging 19.1 shots per game, to just seven shots, four on net, in a 1-0 win.

The winner will advance to the Big East final on Sunday, November 13th, at noon. That game will also be at Red Bull Arena and broadcast on CBS Sports Network.

Tickets are not yet sold out for the event, and are reasonably priced. $15 will get you a lower-level sideline seat for either the semi-final double-header or for the finals on Sunday. For $5 more, you can get tickets for both the Friday and Sunday contests. The Big East is also offering a two-for-one deal on tickets through Groupon.com.