Share All sharing options for: Soccer-Cats Season Over; Women Win

Villanova soccer took the field on a chilly November night, with hopes that they could secure their first trip to the Big East final on Sunday. Only a small contingent of fans were present for either school, but the Villanova cheering section was determined to be loud enough to sound like the stadium was full.

Villanova would lose the game, 2-0 to the St. John's Red Storm, ending their season. Still, it was the most success the Wildcats have ever had in the postseason. Prior to this season, the building program had never won in the Big East tournament.

"I am extremely proud of these guys," head coach Tom Carlin said following the game. "It was a big breakthrough for the program to get where we did this year and I am happy about that. Throughout the entire season the guys battled hard and they were committed to be in it for the long run."

The first half was a defensive struggle. Villanova's defenders marked their man closely and were able to stop the St. Johns advances. The MVP of the half, however, was Villanova goalkeeper John Fogarty, who had 4 saves. Villanova struggled on offense for most of the half, however, with passes being off-mark and only 3 shots being registered. St. Johns went into the break with an 8-3 advantage in shots-taken.

The second half was a different story. 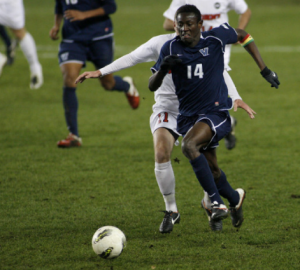 The Wildcats' best chance to score came in the 75th minute, when a hard shot by junior midfielder Emerson Lawrence was saved by Naples, who came out of the net to make the play. Villanova's Kyle Soroka grabbed the ball rebounding away and attempted to hammer it into the goal with 15:40 left in the game, but that shot was headed away by a St. John's defender protecting the empty net.

"It was very heads up play by the two defenders that positioned themselves in front of the goal," Carlin said.

The next St. John's possession would shift the momentum dramatically. The Red Storm finally broke the scoring open in the 77th minute, when a defensive lapse allowed a light chip shot to roll into the goal. Jack Bennett recorded the assist on a pass to Walter Hines. Villanova's Kyle McCarthy and John Fogarty both went for the ball, but Hines got their first, and tipped it past Fogarty, who was no longer in a position to get the save.

Villanova maintained their attack after the goal, needing one of their own to tie and two to finish ahead. The 'Cats just couldn't get a good shot on goal, however.

In the 82nd minute, the Johnnies scores again, on an Ido Ligety header, which dimmed the 'Cats hopes substantially.

Despite the loss, the Wildcats are able to go back to the Main Line feeling good about what they did this season.

"We played our best soccer at the end of the season and because of that we put ourselves in a position to be able to compete on a national level against the likes of Notre Dame, USF and St. John's," Carlin said. "I am proud of that."

Villanova's longtime women's basketball coach, Harry Perretta, was going to reach 600 wins this season and after opening their season with a win at the Iona Tip-Off Tournament, that milestone should be reached sooner than later. The 'Cats knocked off the nationally-ranked Michigan State Spartans 75-64, to give Coach Perretta his 599th career coaching victory.

"I'm just thrilled for the kids because they've never experienced anything like that before," Perretta told the Philadelphia Inquirer.

Perretta can reach that milestone as soon as Saturday afternoon. His Wildcats will play Iona, the tournament hosts, at 2:30 in the title game. The Gaels advances with an 85-69 victory over North Carolina A&T.

The 'Cats were lead by guard Rachel Robert and forward Lauren Burford, who each scored 15 points. Burford went 4-6 from the field, scoring all of her points on 4 triples and 3 made free-throws. Center Laura Sweeney added 14 points and grabbed 10 boards in what may have been the game's most vital performance.

Devon Kane went a perfect 10-for-10 at the free-throw line as well, to earn her 10 points the hard way.

The Wildcats were consistent all game, shooting about 44% from the girls in both halves. Michigan State, however, cooled down significantly after connecting on 48.3% of their shots in the first half to get out to a 37-36 lead. They made just 30.3% after the break.

The 'Cats took the lead in the second half with 12:59 left on the clock. Lauren Burford connected from beyond the arc to make the score 47-46, which was the beginning of a 15-7 run to put the 'Cats ahead by 8 at the 6-minute mark.

With under a minute left, the 'Cats were ahead 66-62 and the Spartans were forced to foul. Villanova went 9-of-10 on those opportunities to seal the win.

Coach Perretta is now 21-13 in season openers and the 'Cats are now playing for their fifth-straigh in-season tournament title. Whether they get that win or not, whenever Perretta notches his next victory, he will become the 35th coach in the history of women's basketball at any level and the 22nd Division I coach to reach the 600 career win mark.