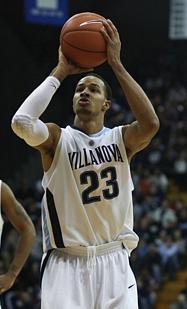 The 2011-12 Villanova Men's Basketball campaign started off on the right foot on Friday night with the 'Cats defeating Monmouth 106-70.

Dom Cheek paced 'Nova with a career-high 27 points in front of the home crowd at The Pavilion. Junior big man Mouphtaou Yarou added a career-high 24 points and recorded his first double-double of the season by grabbing 10 boards as well.

After a disappointing sophomore campaign that caused many to question Cheek’s ability, confidence or both, he turned some heads this summer scoring 34 points in Villanova’s 94-92 win over Israel in the Euro Jam tournament. Cheek was impressive again tonight, hitting 9 for 15 from the field and setting the tone for the team, which shot 36-66 (54.5%) including 12-25 from behind the arc. Cheek, Wayns and Freshman Darrun Hilliard shot a combined 10 of 16 from long range. The Cats also shot a 85% from the free throw line.

Mouph Yarou, who had perhaps the most impressive showing in the Euro Jam last summer, shot a sizzling 9-12 from the field tonight. Mouph showed a strong inside game complemented by a nice 10-foot jumper not often seen last season.

In another encouraging sign for the Cats, Malik Wayns played a strong game at point with a renewed focus on distributing the ball. Although he finished with 15 points on 4-9 shooting, he took only four shots in the first half and tallied 5 assists for the game.

The Wildcats out-rebounded the Hawks 42-24 while causing 16 turnovers. Markus Kennedy had 8 rebounds and Cheek added six. In an important stat to look at this season, Jay Wright's squad tallied 22 assists on their 36 made buckets, while turning the ball over 16 times.

Villanova next takes on LaSalle on Tuesday.