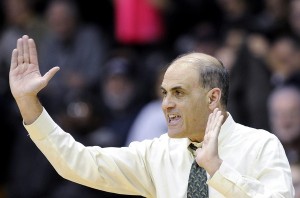 The Villanova women's basketball team moves to 2-0 on the season as head coach Harry Perretta got to 600 wins in short order. After defeating a ranked Michigan State team yesterday, the 'Cats moved on to face the Iona Gaels in the title game of the Iona Tip-Off Tournament. They won in dominating fashion, 76-47.

Perretta is now just the 22nd Division I women's basketball coach to reach the 600 career win mark. Only 35 other coaches have reached that mark at any level of women's college basketball.

Once again, the team was lead by Rachel Roberts and Lauren Burford, who shared the load, scoring 16 and 14 points respectively. Roberts, a 5-9 junior guard, also recorded 3 assists. Laura Sweeney, a 6-2 junior center, was also a major contributor to the victory, scoring 12 points and grabbing 6 boards, 4 steals and a block in the contest.

Devon Kane a sophomore guard was also great off the bench, adding 11 points and 6 more rebounds for the 'Cats.

Only one Gaels player managed to score in double-digits, Kristina Ford, who scored 12.

This is the Wildcats' fifth-straight in-season tournament championship, and moves to 3-0 all-time against the Iona Gaels.