Closest to the Pin Round 1: LaSalle

Share All sharing options for: Closest to the Pin Round 1:  LaSalle

VUHoops vs. Vegas: Based on the average predicted scores of the VUHoops Crowd and the posted Vegas line, we would have LOST $200 by betting ‘Nova -14 (loss) and the Over (loss). The details follow. With the double-loss, we begin the season down $200.

Note: Closest to the Pin returns for the December 3 Big Five contest vs. Penn.

Update: Tuesday, November 15 (Game Time). A total of 115 VUHoops readers have posted predictions so far, none picking the Explorers to win. As a group, the readers see ‘Nova winning by a score of 85-69 (a margin of 16.0 points and implied over/under of 154). The Vegas odds makers picked 'Nova to win by 14.0 points and set the over/under higher at 150.0 points, implying a final score of 82-68. 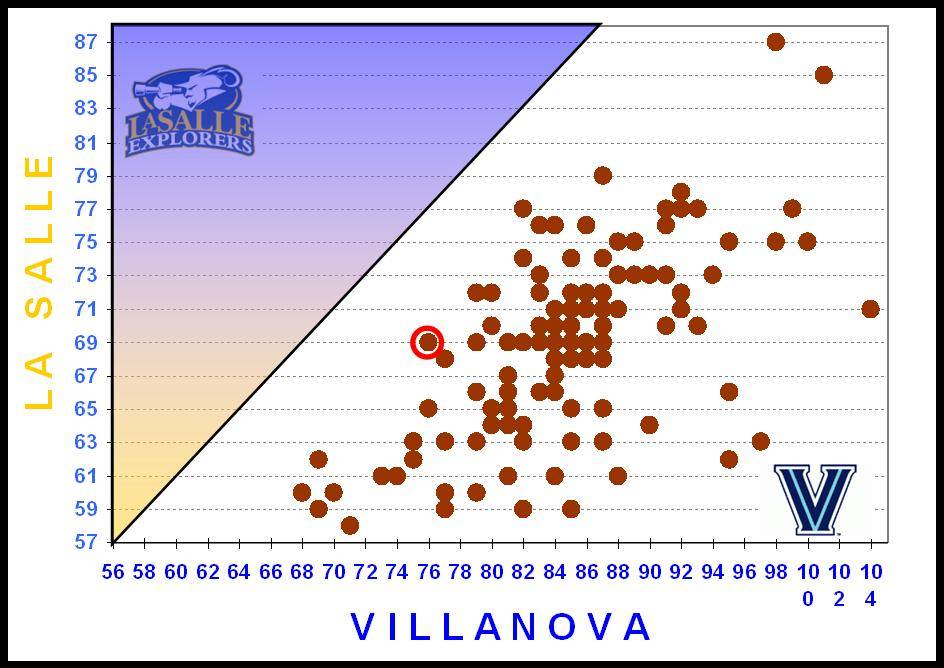 Window Opening: Sunday, November 13, 8:00 PM The window is now open for our readers to post their predicted final scores for Tuesday’s game against LaSalle at the Pavilion in the opening round of our Closest to the Pin Contest (TV coverage on ESPN3).

While not listed in the Top 25, based on votes received Villanova is ranked #33 by AP and #34 in the ESPN/USA Today Coaches Poll. Kenpom.com ranks Villanova #27. LaSalle is also unranked in either the AP or ESPN/USA Today Coaches Poll, and is ranked #186 by Kenpom.com. LaSalle boasts a record of 1-0, coming off a 79-53 win over Lafayette on Friday.