Searching for a BIG 5 Win

Share All sharing options for: Searching for a BIG 5 Win 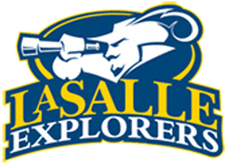 La Salle basketball hasn't set the world on fire in a long time, but they have given the Wildcats a few fits in recent years. The Explorers kept it close last year at Tom Gola Arena, even taking the lead for a while, but ultimately the Wildcats were able to squeak out a 3-point victory. They had to work hard for that win.

Despite giving Nova one of its toughest early challenges last year, the Big 5 rivals fell on some hard luck as the season dragged on and finished below .500 and missed the NCAA tournament for the 19th consecutive year. Despite their tough luck, however, La Salle was 20th in the nation in scoring last season, but didn't accomplish much in the way of defense.

Aaric Murray was not happy with his place with the Explorers and opted to transfer to West Virginia University. Ruben Guillandeaux and Jerrell Williams were also a big part of last season's La Salle team, but both of them ran out of eligibility after last season.

On Tuesday, they will play without junior guard, Ramon Galloway, as well. Galloway is a transfer player from South Carolina, who suffered a head injury during the Explorers' 79-53 win over Lafayette on Friday. Though he was taken out of the game strapped to a stretcher, the diagnosis was just a concussion. It isn't known how long he will be sidelined for, but he certainly won't play against Villanova.

Galloway, a Philadelphia native, averaged just over 10 points per game for the Gamecocks in 2010-11, but his scoring isn't the biggest thing La Salle will miss. He scored just 5 points against Lafayette, but earned his Coach's respect on defense.

"He’s a real weapon defensively," Coach John Giannini told PhilaHoops.com. "Not only a good individual defender but he elevates our team defense. When you see a guy flying around the court like that, you kind of feed off of that."

La Salle's star, however, is sophomore point guard Tyreek Duren, who scored 17 points in their opening game to lead the team. He also notched 6 assists, 6 rebounds and 4 steals in that contest. All of those improve upon his numbers from last season.

The Explorers started four guards against Lafayette and got almost all of their scoring from the backcourt. In addition to Duren, three other guards were in double-digit scoring. Earl Pettis had 16 points, Taylor Dunn had 12 and Sam Mills contributed 10 more.

Combined, the team connected on 49.2% of their shots from the floor and 56.3% from beyond the arc.

Since La Salle doesn't have a very big team, Villanova is likely to again start four "big guards" (as Jay Wright makes a point of calling them). That line-up shot 54.5% from the floor and 48.0% from deep against Monmouth on Friday. Nova had three players scoring in double-digits, including two who scored over 20 points in the 106-70 win.

Maalik Wayns dished out 5 assists while setting up Mouphtaou Yarou and Dominic Cheek, who both made the most of their opportunities, shooting 75% and 60% respectively on their opportunities from the field. Cheek was also 5-8 from beyond the arc just days after a very cold shooting night in an exhibition game against Division II NYIT.

Unless Villanova becomes more consistent, streaky shooting performances may be the norm this season. That means that the team will need to make defense its hallmark in order to win games consistently.

The 'Cats are currently ranked 57th by KenPom.com in adjusted defense, but this early in the season, Pomeroy's rankings still heavily rely on his projected numbers and last season's performances. According to Villanova By The Numbers, the Villanova defense rated 87.9 for the game on Friday, which is where KenPom.com rates Kentucky, their third-ranked defense. It was also significantly better than the 95.1 rating that KenPom.com gives Villanova. In fact, Wildcats' defense got tighter in the second half,which may show that there is plenty of room for improvement.

For the match-up with La Salle this week a tight defense is likely a requirement. Dr. Giannini's squad is determined to play hard on defense this season, and the 'Cats will have to match their intensity to get the win.

Villanova will score points, but may need good rebounding to get second chances if the shots aren't falling for Dominic Cheek and Maalik Wayns. Players like James Bell also have a tendency to be streaky on offense, but every member of the Villanova starting line-up is capable of having a big night. They are all capable of playing defense as well.

If the 'Cats can put on another show like they did on Friday, the Big 5 opener will be another big win for the 'Cats. If they struggle and let the La Salle team hang around, they will need to out-work their opponents to win.

The game will tip-off at 7:00 p.m. on Tuesday from the Pavilion at Villanova. ESPN3 will air the game live, and you can listen on 950AM radio in Philadelphia.

***Get your predictions in for Closest to the Pin!***

This week Villanova is promoting something called "Beat Week," where the 'Cats will take on Delaware in both Men's and Women's basketball leading up to the football game on Saturday. It is very important that Villanova fans show up for the football game.