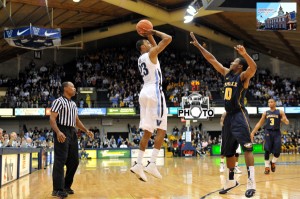 Villanova struggled with shooting from the field, but nailed 34 free throws to come back and beat La Salle 76-69 in overtime. It was the second consecutive night that a Big 5 match-up went to overtime — imagine that as a double-header. Despite needing an additional 5-minute period, Villanova pulled out the win behind Maalik Wayns and his 22 points and 4 assists in 37 minutes; the point guard also finished one rebound shy of a double-double.

Mouphtaou Yarou did have a double-double, with 10 points, 14 rebounds and 1 block. James Bell and Dominic Cheek joined their teammates in double digit scores, with 15 and 18 points respectively.

The Explorers got off to a strong start and benefitted greatly from a tremendous shooting performance by Sam Mills, who went 4-6 from three and scored 19 points in the game. Near the 2 minute mark of the first half, La Salle was ahead by double-digits, with their largest lead being 10 points.

At the end of the first half a couple of quick possessions allowed the Wildcats to shrink that lead down to 5 points.

La Salle got itself into foul trouble on a few fronts quickly. Five Explorers finished the game with at least four personal fouls and center Steve Zack picked up a 5th foul and had to leave the game at the end of regulation. Villanova shot 41 free throws in total, while La Salle made it to the line only 11 times. Both teams converted over 81% of those attempts. 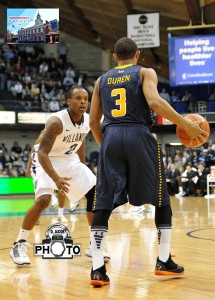 Villanova took 23 shots from beyond the arc and missed all of them until James Bell finally nailed one with 13:49 left in the second half with a Wayns assist. Bell would connect on two shots from deep, as would Wayns, on a night where the 'Cats went 4-of-23 (17.4%) from three. The 'Cats were cold shooting generally, making just 35.2% of their attempts overall.

Villanova was able to scrap its way back into the game, however, thanks especially to a steal and a bucket by Darrun Hilliard that tied the game with under a minute left. Nova did have a chance to win the game at the end of regulation, but lost the ball.

In overtime, the 'Cats were finally able to pull away from their Big 5 rivals. La Salle was overmatched, allowing Dominic Cheek to score 8 points from the free-throw line in overtime. With about a minute left in overtime, Villanova was ahead by 5 points and La Salle began fouling to stop the clock.

Maurice Sutton played excellent defense off the bench in overtime. In just 7 minutes, Sutton recorded a blocked shot and 2 clutch rebounds to help the 'Cats ice a win that was more of a challenge than anyone expected.

Wayns' second-cousin, Tyreek Duren lead all scorers with 24 points, while dishing out 5 assists and grabbing 5 boards. He shot a little over 47% from the floor and was clearly the best player La Salle had on the court, playing all-but one minute of the contest.

Next up for the Wildcats is a Friday night appointment with Delaware. The Blue Hens were added to the schedule as part of "Beat Week," where Villanova will play rivals Delaware in basketball and football on back-to-back days (and women's basketball on Tuesday).