Share All sharing options for: Villanova At PPL Park 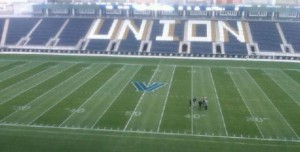 "The seating is so close to the field, for players and coaches, it's an amazing environment," said Nick Sakiewicz, Philadelphia Union CEO. "We always designed it and had in mind that this wouldn't just be a home for great international football but it would be a great home for American football."

"This is a great venue," head coach Andy Talley said. "It looks like it was built for football. It’s perfect." 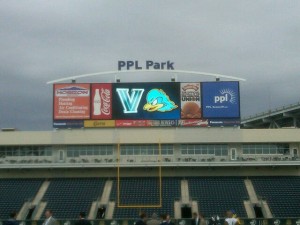 Instead of cold benches, PPL Park offers comfortable seatbacks. While the concession stands will still sell hot dogs and soda, at PPL park, you can also purchase beer inside the stadium.

Villanova is hosting this game at PPL Park to gauge your interest in having a better venue for Villanova football. A better, bigger and newer facility where tailgating is allowed and beer is sold can only benefit the Villanova fans, but will the experiment continue if fans don't show up?

"We'd be able to have a game-day atmosphere, like at Delaware," Talley told reporters, campaigning for the stadium to become the permanent home of Wildcat football.

"It’s the perfect venue. It’s easy to get to. The entrance and exit, with the new ramp, drops you right at the stadium. There’s plenty of parking and it’s safe. It’s right by the river. Everything about PPL Park is positive.

"I think we’re going to have a great game-day atmosphere, which we lack at Villanova right now. I think our fan base would love coming here every Saturday, rain or shine, because it would be an outdoor party."

There is currently no deal to play football at PPL Park after Saturday's game, but the Philadelphia Union executives would like it to happen. Villanova athletic director Vince Nicastro has not taken that possibility off the table.

"It’s an ongoing process," Nicastro said. "It’s certainly something we’re looking at, but let’s get through this one and gauge the feedback, which I think is going to be very positive, but it’s a little more complicated with homecoming and parents weekend. Like we do in basketball, you want to have some events on campus that are good for the students and the convenient for people. We’re not going to rule it out, but we want to get through this one first and see where it goes from there."

Villanova is transforming the soccer stadium into the home of Villanova football. Though Delaware coach K.C. Keeler and others have described the stadium as a "neutral" site, it is the Wildcats' hope that it will be anything but that. Fans will also be treated to the "Wildcat Village" which, as you might imagine from attending other recent Villanova-run events will almost definitely have a bouncy-house and other inflatable outdoor entertainment as well as food and drinks for fans who choose not to set up their own tailgate.

As the last home game, Villanova will be hosting a number of football recruits at PPL Park in hopes that the new facility and atmosphere will impress them. As Andy Talley has noted, the program's status with the Big East conference has made recruiting difficult lately.

"Right now it changes from day to day and it is very difficult to predict what is going on," Talley said.

Villanova and Delaware have played some classics in recent years and the 'Cats are ready for another one after turning the corner and beating UMass 35-17.

Tickets are currently still available, but Villanova is preparing for a capacity crowd on Saturday.