Share All sharing options for: Expansion Update: Sooner than later? 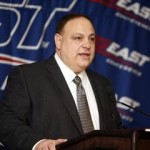 It has been over two weeks since the Big East presidents met in Philadelphia to vote on invitations to extend to new members, both all-sports and football-only. The process of those schools joining the conference officially may soon be wrapped up.

The conference was reportedly set to invite UCF, Houston, SMU as all-sports members and Navy, Air Force and Boise State as football-only members.

UCF, Houston and SMU have been poised make that move for a while. Navy reportedly was ready to jump to the Big East as well. Boise State and Air Force had a few more boxes to check before they were ready to sign on the dotted line, however.

Air Force has reportedly been on the fence about making the move since then, however, and some reports have even suggested that their administration was leaning toward staying put in the Mountain West. That created a complication because Boise State was concerned about being a geographic outlier, and asked the Big East to add either Air Force or another western school to build a true western division.

Boise State administrators reportedly spoke with their counterparts at San Diego State, in an effort to help the Big East find another western football partner.

The Big East, however, has been talking to Brigham Young University about bringing their currently-independent football program into the conference. Reports out of Salt Lake City on Tuesday afternoon were that BYU was very close to finalizing a football move to the Big East, providing Boise State with a western partner and the Big East with one of college football's biggest and most widespread fan bases.

Unless Air Force joins as well, the Big East will likely need to add another western school to create even 6-team divisions. It has also been rumored that UCF could play in the proposed western division instead of either Louisville or Cincinnati, who have requested that they not be placed in a division with the western schools.

An announcement could come soon, but some want to hold off on announcing any additions until all of the new members have signed off on making their move official. No announcements will be made until after schools have negotiated terms, been offered an official invitation under those terms and gone through whatever legal processes needed to accept that invitation.

Some reports believe that the announcement of these moves could come as soon as tomorrow, and that doing it before Houston and SMU face-off on ESPN's College GameDay this weekend is the goal.

Boise State, Houston and UCF have all already received the necessary approvals to have their administrative leaders accept a Big East invitation on the school's behalf. SMU and BYU are not subject to the same public process, but could likely receive approval from university trustees in short order. The service academies have a different control structure that would likely require some approval from the Department of Defense.

The conference-affiliated schools likely wouldn't join the Big East until 2013 and many believe that the independent schools, Navy and BYU, would also want a year to play out some contractual obligations before joining the conference. That would leave the Big East unchanged in 2012, while Pitt and Syracuse wait out their 27-month withdrawal notice.

West Virginia's status for the 2012 season remains in limbo as they litigate their exit from conference in Rhode Island and West Virginia.

Sources at Villanova tell VUhoops.com that the school's football candidacy remains in a holding pattern while, "things above" settle down. The administration at Villanova has been working hard to position the football program for both the short and long term. A new fundraising push may have tremendous influence on Villanova's ability to make a move in football.

Regardless, the Big East will likely need to move to a 14-member model in football for Villanova to be able to join the conference. That is no guarantee, but Villanova can certainly try to make a case for such a move.