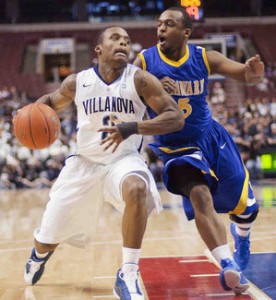 Ranked or not, when Villanova takes the court in November, there is a target on their backs. With few exceptions, beating Villanova will make the season of the schools that are on the 'Cats early schedule. When the opponent is also Villanova's main rival in football, the target only becomes bigger.

While Villanova and Delaware play an annual game on the gridiron, contests on the hardwood are not offered to the Blue Hens quite so often.

Delaware opened their season last Friday with a 58-54 road loss at Radford University. In that contest, they shot just 28.8% from the field as a team. They were led by sophomore guard Devon Saddler in the loss, who scored 18 points on just 22.7% shooting (14.3% from 3). Junior forward Jamelle Hagins put up the best all-around performance for the Hens, however, with 17 points, 9 rebounds, 3 blocks and 2 assists.

No Blue Hen recorded more than 2 assists against Radford and the team finished with just 8 total assists and 15 made field goals.

Last season, Villanova played Delaware on a Saturday in December with the 'Cats prevailing in a 19-point victory. Hagins and Saddler are the only two returning starters from that Delaware team, they scored 12 and 9 points respectively. Their leading scorer in that game was Jawan Carter, who has since graduated.

Losing Carter may have been addition by subtraction, however, since the senior point guard had a tendency to shoot the ball rather than getting his teammates involved. The Hens had a very inefficient offense last season that they are trying to improve on.

Saddler becomes the new star in the Blue Hens backcourt after winning CAA Freshman of the year honors last season. He is a streaky shooter, but has the strength and athleticism to get into the lane as needed. According to his coach, he is one of the hardest workers on the team.

Hagins lead the CAA in blocked shots last season with 87, and he will play a key role in on the court for Delaware this season.

The Blue Hens are trying to take a next-step this season, but they have many of the same problems as Villanova. Shooting from the floor can be a struggle for both teams, who tend to rely on superior athleticism and defense to get ahead of opponents and win games. If Delaware hopes to shock Villanova on Friday, they will have to beat the 'Cats at their own game.

Villanova has one great advantage. While both teams can struggle shooting, Villanova has been terrific from the free-throw line, connecting on 83.6% of their attempts in the first two games. Delaware made just 61% of their 36 free-throw attempts at Radford last week.

When the 'Cats get hot from the floor it may be tough for anyone in the country to beat them. The rest of the time, they will have to play tough defense, rebound and create turnovers to beat their opponents. Things that have been the hallmark of Villanova teams in the past.

Ideally the 'Cats will avoid playing in the half-court set too often, which is where they struggle the most. Points in transition tend to be easily gained for Nova (unless an anxious freshman goes for a highlight dunk over the easy score), and that will normally be their preference — to play fast and defend.

This is a young Villanova team that is still learning how to win games. They will do some more learning on Friday night.

The game will tip-off at 7:00 p.m. on Friday from the Pavilion at Villanova. ESPN3 will air the game live online, and you can listen on 950AM radio in Philadelphia.

If you don't have your tickets for the Delaware Football game at PPL Park yet, there are still some tickets available. Please come down to the park, tailgate and enjoy an afternoon of football and fun.