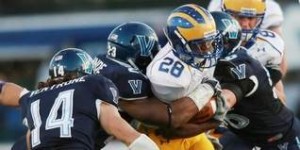 Villanova football has played only one opponent 45 times in school history. That opponent is Boston College. On Saturday, the University of Delaware will pull into a tie with BC in that regard, joining the Eagles as Villanova's most common football foes. The game will be significant for a few other reasons as well, however.

It will be the first American football game held at PPL Park, home of the MLS' Philadelphia Union, and perhaps the first of many Villanova football games to he held at that facility. Head coach Andy Talley has openly promoted the idea of moving his team into PPL Park permanently, as he feels that the atmosphere and fan support would be better at the new stadium.

There are also some serious playoff implications on the line for the Blue Hens. At 6-4, Delaware is likely on the outside looking in when it comes to a playoff berth, where 7 wins is largely believed to be the minimum needed to secure a spot in the FCS postseason. If the Hens win the game, they may still be passed over because their win over West Chester was not a Division I game, but they will at least have a case to be made.

Villanova then, comes into the contest looking to play the role of a spoiler. By winning, the 'Cats would also earn their second CAA win, a 6th consecutive win over Delaware, and would keep possession of the questionable-looking "Battle of the Blue" trophy — which has thus-far never been housed at Delaware Stadium.

Those 6 consecutive wins allowed Villanova to take a 23-20-1 lead in the all-time series that started with a 10-6 Delaware victory in 1895, but wasn't played regularly until the 1980s. Andy Talley is 12-11 against the Blue Hens and 6-3 against Delaware coach K.C. Keeler.

The Wildcats hope to pull that feat off with a young team that seemed to find its way in Massachusetts two weeks ago. The Minutemen were stunned by a Villanova offense that rose up to score 35 points for the first time this season after averaging just 14 per contest as late as October 22nd.

The Villanova defense also came to life against UMass, who had the benefit of a home field, a homecoming crowd and about 10 more scholarship players. None of that stopped senior James Pitts from having the game of his life at cornerback, grabbing three picks. He is now tied for the CAA lead in interceptions this season. Playing opposite Pitts was Craig James, who also had a tremendous game in Amherst recovering two fumbles. A third fumble was forced by defensive end Rakim Cox, and recovered by Marlon Johnson.

Freshman linebacker Dillon Lucas, leads the defense with 85 tackles this season (48 solo). He also has recorded 2.5 tackles for loss and two sacks while starting every game this season. He is a strong candidate to be the first-ever recipient of the Jerry Rice Award, which is given to the top freshman player in FCS football.

Offensively, the Wildcats have finally settled on a quarterback after a series of changes throughout most of the season. Freshman Chris Polony has turned in two good performances in his past two starts, with six touchdown passes to just one interception in those games. His passes haven't netted more than 200 yards in any game, but the Villanova running game has been strong enough to chew up a lot of yardage in those games.

That running game was driven by Austin Medley, who scored twice in against Massachussets, once on the ground and the other on a short reception. He also scored against Maine and recorded his, and the team's first 100-yard rushing performance a week earlier. Medley was injured against UMass, however, and is listed as doubtful this week.

Without Medley, Villanova will turn to senior Lawrence Doss to take on a bigger role in the backfield. The 'Cats will also likely return Kevin Monangai, this week after the freshman was cleared by team doctors to play. Monangai had been earning a bigger role in the running game prior to being sidelined with mono a few weeks back. He could return to where he left off, but if he is too rusty, Jamal Abdur-Rahman could be given an increased number of carries.

Abdur-Rahman worked his way from being a little-used tailback to start the season to starting games at slot receiver. He still also returns kickoffs and carried the ball out of the backfield as well. Against UMass, he tallied 169 all-purpose yards, including 8 carries for 62 yards and 6 catches for another 62 yards. He is averaging a team-best 113 all-purpose yards per game.

For Delaware, this season is the first in a while that they have not featured a big-name transfer at Quarterback. Tim Donnelly is expected to start for the Hens this weekend after playing in all ten games thus far. He averages 157 passing yards per game and has thrown for 11 touchdowns on the season. Those passes were largely completed to Nihja White, who caught 43 balls for 591 yards and four touchdowns this season.

Instead, their attack has been built around running back Andrew Pierce, who emerged last season as one of the CAA's top players. He has accumulated 1,170 yards this season, averaging 117 yards per game on the ground and scored 15 touchdowns. Pierce is also the second-leading receiver on the team, with 41 catches for 210 yards. Pierce has been the beneficiary of some excellent offensive line play, which will give the Villanova trio of Rakim Cox, Antoine Lewis and Marlon Johnson a handful.

The Delaware running game has helped them to possess the ball for around 32 minutes per game, which is tops in the CAA this season.

Defensively, cornerback Travis Hawkins has been tough to beat in a secondary that Keeler didn't express much confidence in prior to the season. Hawkins has 4 interceptions this season. He also returns kickoffs, where he averages 25 yards per attempt and has scored once this season.

Outside linebacker Paul Worrilow leads the Blue Hens in tackles with 87, and has accumulated 8 tackles for loss in 10 games this season. He has not yet recorded a sack on the season, but running the ball to his side of the field, may be a difficult task for Villanova on Saturday.

Villanova will need to continue to make progress on offense and defense to win this game. In their two wins so far, the Wildcats were plus-seven in turnover margin, while going minus-six in that category for the season. Forcing turnovers and converting on those opportunities with a short field were a big factor in Villanova's win at Massachusetts as well as against Penn.

The Wildcats have allowed a number of big rushing performances against them. The defense will need to improve upon its average of 172 rushing yards-against to get stops against the run-heavy Delaware attack. The defense did well in that regard against UMass, holding them to just 70 net yards rushing.

Donnelly hasn't been asked to win games with his arm much this season, so being able to shut down the Delaware running game could make the Hens a bit uncomfortable on offense.

Offensively, the 'Cats need to convert their attempts from the redzone, which was an issue against Maine in the snow. They have moved the ball well in the last two games, however, and that trend may be likely to continue if Polony avoids taking big risks and protects the ball.

Both teams usually rise to the occasion for this rivalry game and that has resulted in a number of close games and classic finishes in recent years, including an overtime game last season. There is little reason to expect things to be much different this year.

As the last home game of the season for Villanova, the coaching staff will be hosting a number of football recruits at PPL Park. Our sources have confirmed that all of the current oral commitments are expected to be in attendance, including top linebacker recruits, Corey Majors and Austin Calitro. The staff also will be hosting a number of players on their recruiting radar that they hope will commit before the signing period opens in February.

Television: The Comcast Network will carry the game live.