Not Fine: A Scandal Brewing at Syracuse

Share All sharing options for: Not Fine: A Scandal Brewing at Syracuse 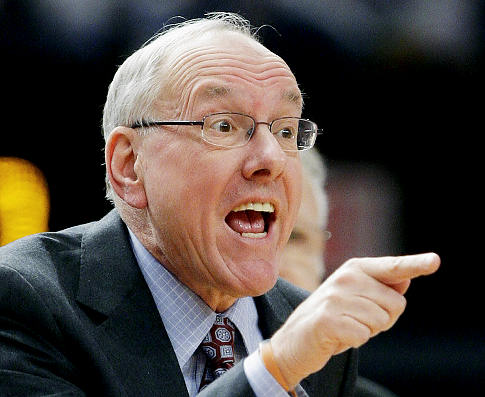 On Thursday night, ESPN reported that the Syracuse police are investigating longtime assistant coach Bernie Fine on allegations that he molested a team ball boy over a period of time, starting in the 1980s. The immediate reaction of most observers is to compare the situation to the one at Penn State. Syracuse University officials deny any cover-up, however, and claims that they acted appropriately when faced with the allegations.

They released the following statement on the issue: "In 2005, Syracuse University was contacted by an adult male who told us that he had reported to the Syracuse City Police that he had been subjected to inappropriate contact by an associate men’s basketball coach. The alleged activity took place in the 1980′s and 1990′s. We were informed by the complainant that the Syracuse City Police had declined to pursue the matter because the statute of limitations had expired.

"On hearing of the allegations in 2005, the University immediately launched its own comprehensive investigation through its legal counsel. That nearly four-month long investigation included a number of interviews with people the complainant said would support his claims. All of those identified by the complainant denied any knowledge of wrongful conduct by the associate coach. The associate coach also vehemently denied the allegations.

"Syracuse University takes any allegation of this sort extremely seriously and has zero tolerance for abuse of any kind. If any evidence or corroboration of the allegations had surfaced, we would have terminated the associated coach and reported it to the police immediately. We understand that the Syracuse City Police has now reopened the case, and Syracuse University will cooperate fully. We are steadfastly committed ensuring that SU remains a safe place for every member of our campus community."

According to the ESPN report, the victim, Bobby Davis, who is now 39 years old, claims that Fine molested him from the time he was in 7th grade. The incidents occurred at Fine's home, at Syracuse facilities and on team road trips, including the 1987 Final Four. A second man has also come forward with a similar story.

The victim claims that he never told Boeheim about the abuse, but did report the abuse to the university in 2003. He was turned away, being told that the statute of limitations had run at that time by Dennis Duval, a former Syracuse basketball player who was the chief of police at that time.

The ESPN story is another chilling tale of child abuse falling through the cracks. If it is true, Syracuse will be faced with a moral dilemma of its own. Though, it is not clear that the situation had been nearly as mishandled by the university as Penn State handled the Jerry Sandusky charges.

Jim Boeheim has firmly defended his lieutenant; a man he attended Syracuse University with as a student in the 1960s. One of the victim's allegations was that Boeheim had seen him (the victim) in Fine's hotel room on a number of occasions. According to the coach, that just isn't true.

"I know he's lying about me seeing him in his hotel room," Boeheim told the Post-Standard. "That's a lie. If he's going to tell one lie, I'm sure there's a few more of them."

"I never have been in Bernie Fine's hotel room in my life.

"This is what, 16 to 18 years ago, or whatever it is? But I don't recall ever walking into any of my assistant coaches' rooms. Now, could I have once ... one time? I have a pretty good recollection of things, but I don't ever recollect ever walking into Bernie Fine's hotel room. Ever."

According to Boeheim, the alleged victim only traveled with the team because he would babysit Fine's children, and that happened after he turned 18. Fine's accuser also lived in the assistant coach's basement for a period of time in his teens.

Boeheim accused the alleged victim of coming out with his story now, decades after the molestation allegedly occurred in a move to get paid off.

"The Penn State thing came out and the kid behind this is trying to get money. He's tried before. And now he's trying again. If he gets this, he's going to sue the university and Bernie. What do you think is going to happen at Penn State? You know how much money is going to be involved in civil suits? I'd say about $50 million. That's what this is about. Money."

So far only the two accusers (who are related to each other) have come forward with their story.

If you witness or know about child abuse happening anywhere, the hotline to call and report that abuse is 1-800-4-A-CHILD. Easy to remember, so don't forget it.