Share All sharing options for: Solid win, but no Beat Week beatdown 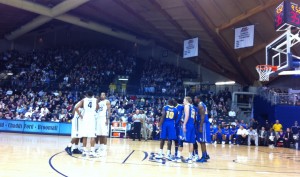 The Wildcats played basketball tonight in their 79 to 69 victory over the Delaware Blue Hens. That sounds obvious, but the way the Wildcats often play is not always recognizable as the peach-basket-derived sport that Villanova fans have come to know and love. Often, the Villanova offense makes the game look like an individual game rather than a team sport.

In the first half against Delaware, however, the 'Cats made 12 field goals on 9 assists for a 75% assist percentage, and some great teamwork. The second half was only a tiny bit worse, a 66.7% assist percentage with 10 assists to 15 made field goals. Passing the ball and setting up teammates is how Villanova needs to play when forced into half-court sets.

"I think we're a different kind of team, we don't have the guys who are going to break you down one-on-one this year, so we've got to execute our offense better, make extra passes, and feeding the post helps," head coach Jay Wright said. "I think that we do have a chance this year to be a much better passing team.

"I think that's something we learned from the La Salle game, where we didn't do a good job sharing the ball. It's not selfish, it's just thinking you can make a play on your own."

Nova opened with a 14-5 run to open the game in the first 5 minutes and stayed in control for most of the half. UDel did make the 'Cats sweat a bit in the second half, clawing their way back into the contest more than once, pulling as close as 5 points early in the second half, but Nova would match them score for score down the stretch to stay out ahead.

"I thought we came out in the second half lackadaisical," Wright explained.

It also helped that Dominic Cheek heated up in the second half to score 17 points that were vital to keeping the 'Cats ahead. He made half of his shots from beyond the arc and 55.5% from the floor after the break. It helped that he shot 6 free throws in the second half, making all of them, including a few that came on garbage-time fouls.

Defensively, the 'Cats were challenging the Blue Hens to make their shots from 3 by often giving their man room on the perimeter. For the most part, it worked, while the Hens burned them for a couple shots outside, their shooting from outside was a struggle. They connected on just 31.3% of those shots in the game, though they made 42% in the second half. Wayns told reporters that he thought his performance had room for improvement, however.

"That wasn’t one of my best defensive games, I had to keep a good attitude and play through it."

The Wildcats had 4 blocked shots (2 from Cheek) and 8 steals in the game and forced the Blue Hens to turn the ball over 13 times. They coughed the ball up only 10 times themselves.

Delaware's sharp-shooter was Kyle Anderson, who connected on 4-of-9 from beyond the arc, he finished with 12 points. Devon Saddler connected on just 3-of-10 from deep and made 42.3% of his shots from the field, but scored a team- and game-high 27 points.

Villanova didn't do much better shooting, connecting on 48.2% of their field goal attempts and 36.4% from deep. Maalik Wayns and Dominic Cheek each had 21 points in the contest to lead the Wildcats on the scoreboard. Wayns also added 5 assists, but was second on the team in that category to James Bell, who recored 7.

Mouphtaou Yarou's star burned bright in the first half, scoring 15 points on 6-of-9 shooting from the floor. The big man looked unstoppable at times. The Blue Hens, who struggled to control the talented big man early, and spent much of the second half keyed in on the Benin national. He scored only 4 points in the second half to finish with 19 and 5 rebounds.

"I think he tired," Wright said. "They were running live bodies at him. They played three guys on him, and then at the end, I think their guards did a great job on our guards, getting pressure on them and not letting them feed the post." 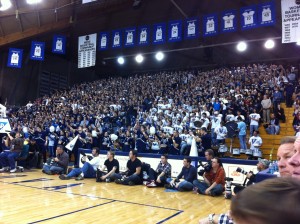 Spelling Yarou down the stretch accounted for the bulk of Maurice Sutton's 13 minutes. He played solid defense and scored 4 points, including Villanova's biggest dunk of the game, which caused the student section to explode with cheers.

The score was closer than many would have expected. Delaware isn't a world-beater at basketball and was coming off of a demoralizing loss to Radford University. Most fans would have expected this contest to be far less competitive than the football game tomorrow. Nonetheless, the pace of the game stayed relatively slow — just 66 possessions — which allowed the Blue Hens opportunities to hang around with the Wildcats.

Like the La Salle game, Jay Wright will likely consider this one a learning experience for his young program. For a young team in the early part of the season, that is all a coach can hope for; to keep learning, growing, and getting better as the season goes along.

The next game is six days away in Anaheim, California when they will open up the 76 Classic agains UC Riverside. In the mean time, Jay Wright is excited to attend the Villanova football game against Delaware tomorrow, going so far as to ask every reporter in the press room if they were planning to do the same.