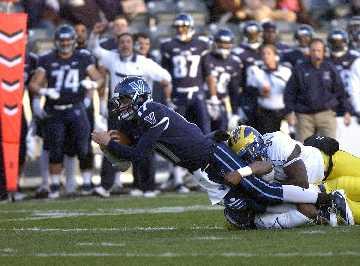 The 2011 edition of the "Battle of the Blue" saw the first American football game at PPL Park in Chester with ideal weather (53 degrees and sunny) in front of an announced crowd of 14,107. At the end of three quarters the home fans were thinking upset as Villanova held a 3 point advantage. However the final quarter saw the Delaware squad man-handle the young Wildcats and outscore them 13-0 en route to a 26-16 victory for the Blue Hens.

Delaware's time of possession was twice that of Villanova's (including an amazing 13 minutes vs. 2 in the second quarter), but the total offense of the two teams was practically even, with Villanova's tallying 338 total yards to the Blue Hens' 334.

Villanova freshman Jamal Abdur-Rahman had 119 rushing yards on 7 carries, 291 all-purpose yards, and two touchdowns. Said Coach Tally afterwards, "I don't remember a freshman having a game like that for us. I don't even remember Brian Westbrook having a game like that as a freshman." Yet it was another freshman, quarterback Chris Polony, who would dash the Cats' hopes with his third turnover on the day while driving for the win at midfield in the closing 90 seconds. Polony's pass was intercepted by Delaware's safety, Ricky Turnstall, who ran it back for a "pick-six" that gave Delaware an insurmountable ten point margin.

The Delaware win snapped Villanova's 5-game streak in the series and dropped the 'Cats' record to 2-9 (1-7), the school's first 9-loss season since 1972. However, with a roster that featured 10 freshman starters, 31 freshman players, and Coach Tally at the helm, there is good reason for optimism among the Cats' faithful that the growing pains of this season will translate into success in 2012.
Press Coverage: