What the football future holds...

Share All sharing options for: What the football future holds... 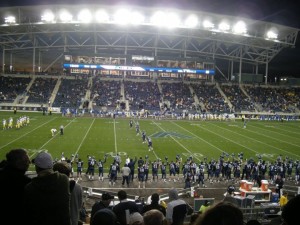 After wrapping up the worst season on record for Andy Talley, Villanova fans have many questions about the program. Can they bounce back next year? Will the Big East still be interested? Where will the program play its games in the future? What changes are coming?

Villanova played a competitive game against a Delaware team that has been good-not-great all season. They played well on defense; it took Andrew Pierce 40 carries to get his 109 rushing yards. The Hens leaned on Pierce to generate yardage all season with a weak spot at quarterback, and ultimately they generated 4 yards less on offense than Villanova did. The big difference was turnovers, where two interceptions and a fumble dealt the Wildcats a mortal wound in the game.

Villanova now looks toward the 2012 season. A year ago, that might have been the first season of a two-year transition period to the Bowl Subdivision and the Big East conference. Now, it is just another season in purgatory.

The Wildcats are not without talent, however, the talent was just concentrated in the younger classes. A dearth of experience will take its toll on any program, and it took Villanova far too long to start figuring out how to play at this level.

That talent includes a trio of freshman tailbacks who all played key roles this season. Austin Medley brought the experience of a redshirt season to the field and took the starting job in short order. He was one of two Villanova tailbacks to run for 100 yards in a game this season and showed tremendous promise running the ball. Kevin Monangai and Jamal Abdur-Rahman were true freshmen who earned carries out of a crowded backfield and impressed coaches. Abdur-Rahman was moved to slot receiver around mid-season because the coaches wanted to get him more touches in any way they could (and were ultimately rewarded with a massive 140-yard, two TD game against Delaware).

Dillon Lucas and Joe Sarnese were two freshmen who pushed their way into the starting line-up on defense. Sarnese started the season returning kickoffs (a job he later lost to Abdur-Rahman), and finished it as a starting safety, while Lucas started every game at outside linebacker and lead the team in tackling with 92 stops. He will need to work with Justus Galac in the off-season to add bulk to his frame, and will only get better once he does.

Lucas was also named to the Jerry Rice Award watch list, and as the leading tackler among all freshmen in FCS football, he has a chance to win it. He was already named the CAA Defensive Rookie of the Year today.

Key players returning for Villanova next fall include everyone but James Pitts, the lone senior to start on defense, and Lawrence Doss, a senior tailback who started part of the season and stepped in for some important carries throughout the fall. Villanova will have players with at least one year of experience manning every position in 2012.

That will come in handy when they open the season against a Temple team that is expected to lose a lot of players after this season, including the possible early-departure of star tailback Bernard Pierce.

The 'Cats aren't satisfied with maintaining the status quo, however. There is a push by the administration to invest in program upgrades for the short term and long term. Those upgrades will involve a fundraising push that behind closed doors has begun to accumulate millions of dollars for program improvements.

Source haven't gone into specifics yet, but those improvements likely include the construction of new on-campus training facilities. As nice as it was to have the run of the Philadelphia Eagles' facility during their bye week earlier this season, the 'Cats will have to spend millions to build on campus to have regular access to the resources that other programs at the FCS level have -- and ideally, a facility on par with many in the BCS could leave the program one-step closer to making the jump up when the opportunity arises.

Coach Talley has wanted to build new facilities for a while, but it was only recently that the administration began to truly comprehend the value of his program.

Football is the key to money and power in college sports. Even mediocre football games can draw as many television viewers as premium regular-season college basketball. While Villanova is not so eager to make a move to FBS that some non-power conferences become attractive options (and less-so because they would potentially have to leave the Big East in other sports), a move to the reconstituted Big East is still something that is on the school's radar.

Father Donohue may have been unfairly portrayed as a negative force in the upgrade push as well. An athletics source noted that Fr. Peter was "very supportive" of the football push, and that understands the need to push for BCS football in order to maintain nationally-relevant athletics. He also understands that high level basketball and football raise the national profile of the university and will help him to accomplish his academic goals.

In the short term, however, there are few moves for the Wildcats to make. They are handcuffed by the Big East rebuilding process and finding a home in a conference like the ACC may be a pipe dream for a school without an FBS football team ready to go (and certainly, the ACC is unlikely to add any school unless Notre Dame joins or the SEC raids).

The plan is to invest in building a stronger FCS program in the short term that will signal to the Big East that Villanova is serious about playing football. It will also make a move to FBS later an easier process.

That short term solution means further games against CAA opponents. Some of those may be moved to PPL Park like this past Saturday's game.

It also means that Andy Talley and his staff will have to continue to recruit at a high level. They brought 9 committed high school seniors to PPL Park on Saturday as well as a number of additional targets. By all accounts they seemed to enjoy the experience, however, and if Villanova can build on the legacy of Matt Szczur, Ben Ijalana, and (less-recently) Brian Westbrook, to continue to attract talented football players, the program can get back on top in FCS and remain poised for a bigger stage.

This would be a simpler process if it had begun in 1997, but it is underway now. Villanova football is experiencing growing pains, but the important thing is that it is growing up.