Share All sharing options for: Previewing The 2011 76 Classic Tournament

Thanksgiving Day coincides with the start of the 2011 76 Classic, one of several early-season tournaments that take up the majority of the out-of-conference schedule. The Villanova Wildcats will be participating in the Anaheim, CA based tourney, which will guarantee each team three games.

Villanova opens up the tournament on Thursday at 4:30 p.m. ET when they face UC-Riverside. We'll have a game-specific preview on Wednesday, but in the meantime let's take a quick look at the entire field and where Villanova could possibly meet them in Anaheim.

A look at each team, after The Jump.

Villanova's opening round opponent, UC-Riverside appears to be at the beginning of a long season. Having not broken the 50-point barrier yet offensively, having lost to UTEP 52-41 and Youngstown St. 53-49. Senior guard Phil Martin does most of the shooting, but isn't very efficient (3-11 and 6-21 FG) in the first two games respectively. Seniors Kareem Nitoto and Elliot Berry will also chip in. This is a woefully undersized group that shouldn't pose much of a threat to 'Nova to make it to round 2.

St. Louis proved they will be a solid mid-major threat all season long after their 77-64 win over Washington on Sunday afternoon to push their record to 3-0 (their other wins came against Tennessee St. and Southern Illinois). Brian Conklin is the primary scoring threat with Kwamain Mitchell proving a viable secondary option. As you would expect, just about everybody on the floor has the ability to hit the outside shot. They would pose a touch matchup for 'Nova and could be possible second round opponents.

Our old friends from up north have fallen on hard times since the two teams last met, with the Eagles slowly continuing to sink to the lower-levels of the ACC. They're off to a 1-2 start this season, having barely snuck past New Hampshire 67-64 before getting demolished at the hands of local school Holy Cross 86-64 and then thrashed by UMass by 36 points at home. They were picked to finish last in the ACC for a reason. It's hard to imagine them topping Saint Louis in their opening round matchup, so barring something unforeseen we're looking at a 'Nova-STL matchup in round 2.

For more on Boston College, check out BC Interruption.

The Lobos basketball team should restore some pride after their football team has been categorized as one of the worst in the FBS this season. They're off to a 1-1 start after losing to in-state rival New Mexico St. 62-53, but then rebounded nicely scoring 76-71 victory over Arizona State. 6'7" guard Tony Snell is the main threat with his ability to score both inside and out. Their first-round match up against Santa Clara should provide an entertaining mid-major battle. If Villanova is to make the finals, New Mexico would be my bet to make it out of this side of the bracket.

An up and down start to the season has left Santa Clara with a 2-1 record, having scored wins over UC Merced and San Jose State. However, they were ripped to shreds by UC Santa Barbara in an 84-58 beatdown. Kevin Foster is the main man for the Broncos, who look like they will have an uphill battle on their hands if they want to break into the upper echelon of the WCC this season. Villanova could not face them until the 3rd game.

One of the top teams in the field, Oklahoma is coming off of a 92-65 shellacking of a Coppin St. team that just gave UConn problems in Hartford for much of the game on Sunday afternoon before the Huskies were able to pull away for good. Their other game was a tight 78-74 win over Idaho State. Sophomore guard Calvin Newell Jr. will be the center of attention for opposing teams. After registering a DNP in the opener due to a NCAA violation, Steven Pledger returned to score 20 points in the blowout of Coppin St. Villanova could not face them until the 3rd game.

For more on Oklahoma, check out Crimson And Cream Machine.

Wazzu is always a tough opponent and has been for years, and they gave Gonzaga a good run in their 89-81 loss in the season opener before rebounding for a 79-68 win against Sacramento State and an83-73 win against Portland. The losses of Klay Thompson and DeAngelo Casto was supposed to hurt their offensive capabilities this season, but the improved play from 6'10" junior Brock Motum and the emergence of DeVonte Lacy and Faisal Aden has been important so far. 3 starters return from a year ago and this team will be in the hunt to finish in the top half of the Pac-12. Villanova could not face them until the 3rd game.

Finally, here is the bracket with games times and TV coverage for the 76 Classic: 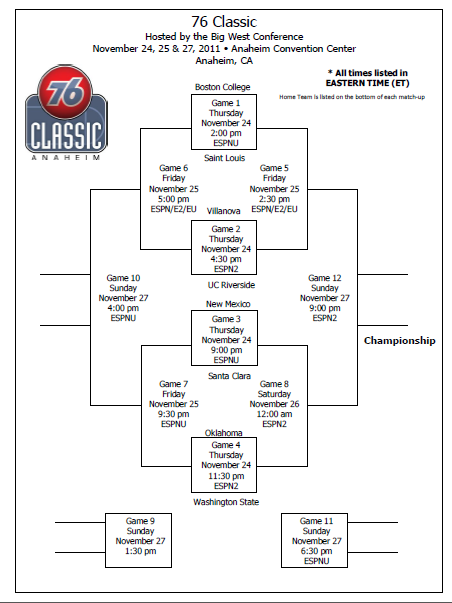 What do you make of Villanova's chances to win the tournament and continue their perfect start to the season?